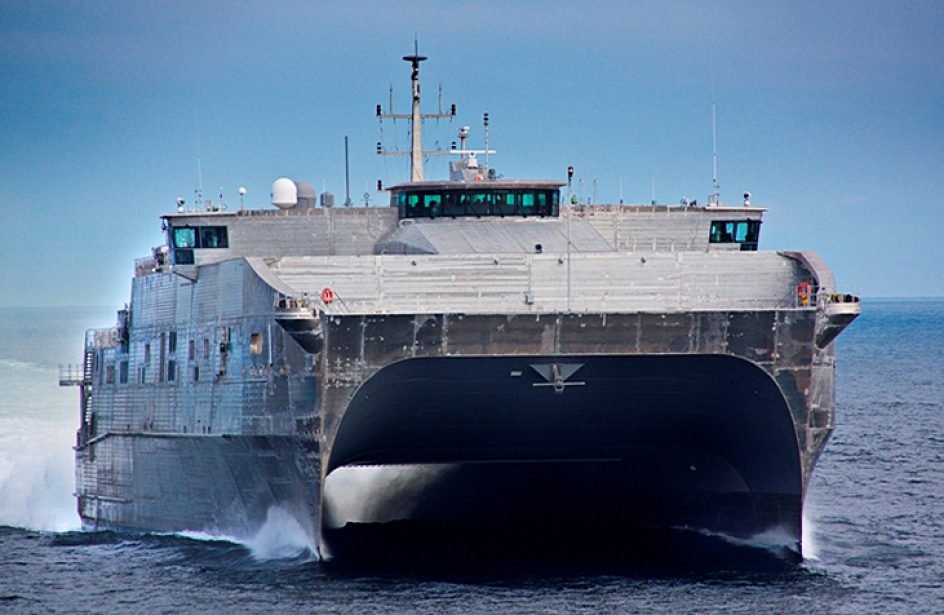 The Yuma is the eighth of twelve Spearhead-class Expeditionary Fast Transport vessels built under Austal’s US$1.9 billion contract with the United States Department of Defense. The ship is powered by four MTU 20V8000 M71L diesel engines that pass power through four ZF 60000NR2H reduction gears to waterjets that are capable of moving it at a top speed of 43 knots over a range of 1,400 miles. It boasts a hull length of 337’11”, a beam of 93’6”, and a draft measuring a shallow 12’7”. It weighs in at 1,515 metric tons and is capable of transporting an additional 600 short tons. The ship carries a compliment of 41 sailors and can transport up to 312 additional troops.

Craig Perciavalle, Austal USA’s president, said it was “exciting to see Yuma join the fleet; an incredible ship built by incredible people.” He added, “What’s even more exciting is seeing how our U.S. Navy is taking these great platforms and expanding their mission sets to support a wide variety of operational needs—demonstrating their value and versatility to our forward deployed Naval forces across the globe.”

The Yuma joins the Spearhead (T-EPF-1), the Choctaw County (T-EPF-2), the Millinocket (T-EPF-3), the Fall River (T-EPF-4), the Trenton (T-EPF-5), the Brunswick (T-EPF-6), and the Carson City (T-EPF-7) in active duty in the U.S. Navy. Soon to join it are the City of Bismarck (T-EPF-9), the Burlington (T-EPF-10), and the Puerto Rico (T-EPF-11), all of which are currently under construction at Austal’s shipyards. The name of the twelfth and final ship in the class has not yet been announced.