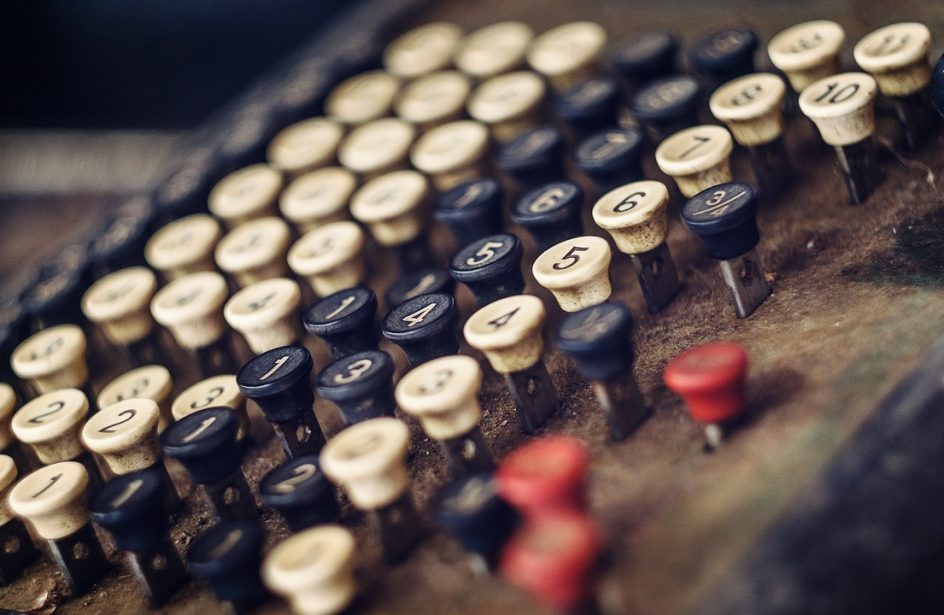 The four biggest aluminium companies in the world (excluding China), namely Alcoa, Norsk Hydro, UC Rusal and Rio Tinto, had a good start to 2017. Thanks to higher aluminium and alumina prices, all four registered significantly higher net profits in Q1 2017 compared to the previous quarter.

An in-depth look at their financial results shows that Rusal, Hydro and Rio Tinto have low production costs, placing them in the first quartile of the cost curve, with Alcoa in the second quartile, though the company is constantly reducing production costs.

Due to favourable market conditions and thanks to an average expected aluminium LME price between US$ 1850 – 1900 per tonne in 2017, all the companies analysed are well placed for the year ahead and may expect significant profit increases in 2017, in line (proportionally) with the positive results achieved in Q1 2017. 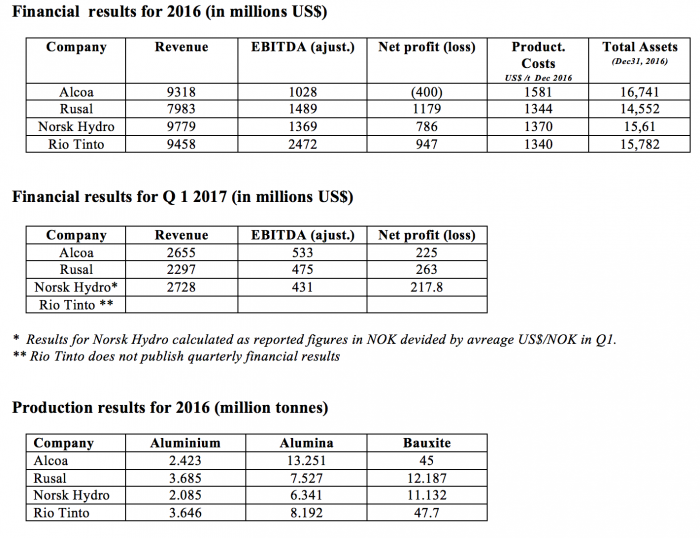 Unlike smaller aluminium producers, the strategies of the world’s four largest aluminium companies are skewed towards the long-term (the next 5-10 years). In line with such long term planning are included costs saving programmes, usually performed over 3 and more years. A concrete example of that is signing long term electricity supply contracts (for up to 20 years), which enables the Big 4 to obtain electricity supplies at much lower rates than those obtained by smaller producers – think, KAP-Montenegro or Aluminij Mostar – that can only obtain electricity supplies for one year, at prices just slightly lower than the market price.

A similar situation occurs with raw materials, where big producers obtain significant discounts by signing long-term agreements for alumina and carbon, for example. What’s more, the Big 4 have several other advantages over small producers: they tend to have their own power plants, which not only insulate them from market conditions but are able to provide electricity for most of their production.

This is the reason why big producers are in much better positions in volatile market conditions and especially during crises, than their smaller counterparts.

Production costs for aluminium smelters have increased in the second half of last year and in Q1 2017, alongside the rising LME aluminium price, but so did alumina prices and other input/raw material costs. Still, the aluminium price rose at a faster clip, resulting in much higher operating and net profits for all main producers in the first quarter (Q1) 2017 compared to the same period in 2016, or even compared to Q4 2016.

Alcoa’s key strategic priorities for 2017 are: reducing complexity, driving returns for stockholders and strengthening the balance sheet. To that end, Alcoa is simplifying its processes and structure, which recently resulted in joining the aluminium smelting, casting and rolling segments into one aluminium business unit. The majority of its energy segment assets have also been integrated in this unit.

Alcoa is continuing its strategy of creating a low cost, competitive integrated aluminium production by decreasing the cost base of upstream operations, which includes closing, selling or curtailing high-cost global smelting capacity.

Since launching as an independent company – (after the Arconic split) – on November 1, 2016, and until December 31 2016, Alcoa has increased its cash position by US$ 198 million and closed the fourth quarter 2016 with a cash balance of US$ 853 million.

Alcoa’s bauxite and alumina operations are competitive, and are in the top quartile of the cost curve, while the aluminium business is in the second quartile and improving.

The company had a net profit of US$ 225 million in the first quarter, compared to a net loss of US$ 125 million in Q4 2016. The result for Q1 includes US$ 108 million of special items largely due to gains from the sale of the Yadkin Hydroelectric Project.

Other than the costs attributed to the creation of the two new companies, most of the restructuring costs in 2016 went to portfolio restructuring decisions, including the closure of the Warrick smelter and the Suralco refinery and mines, and the impairment of the gas field in Western Australia.

Hydro’s main strategy is focused on reducing the risks stemming from weak economic and unfavourable market conditions by improving its cost position as well as maintaining a solid financial position and strong credit worthiness. Hydro’s integrated value chain plays a key role in mitigating those risks as the earnings volatility in the upstream aluminium is typically higher, whereas downstream and energy businesses generate more stable earnings over time.

To that end, the strategy is pursuing high grading and shifting the product portfolio towards higher margin segments. Especially in rolled products this has resulted in a special focus on the high-growth automotive market, and production has recently started at the new Automotive Line 3 in Grevenbroich, Germany. In the first quarter of 2016, the rolled products division signed a multi-year contract for deliveries to UK-based carmaker Jaguar Land Rover.

Hydro’s climate strategy is an integral part of its overall business strategy, which includes reducing the environmental impact of its production activities. The company’s goal is to be carbon neutral in a life cycle perspective by 2020, the target to be achieved mainly through:

Under the “Better Primary Metal” initiative, Hydro is targeting annual savings for its entire smelter portfolio of NOK 1 billion (~US$ 120 million) by the end of 2019, compared to 2015 levels. This includes increasing production capacity at existing smelters through proven technological developments in addition to continuous operational improvements and fixed and variable cost reductions.

The primary metal segment has already sold around 50% of its expected primary aluminium production for the second quarter of 2017, at an average price level of US$ 1875 per tonne.

Hydro’s earnings before financial items and tax EBIT* increased to NOK 2284 million (US$ 271 million) in the first quarter, up from NOK 1829 million (US$ 220.6 million) in the Q4 2016.The increase mainly reflected higher realised all-in aluminium and alumina prices, somewhat offset by higher raw material costs.

However, Q1 results came in lower than expected by a pool of Reuters analysts, with all six divisions missing forecasts. For its most important division, primary metal, Norsk Hydro blamed “significantly higher” alumina costs. The cost of fuel oil, caustic soda, carbon and other raw materials also increased and was responsible for Norsk’s weak results. Underlying EBIT for rolled products was influenced by various operational issues related to starting up production after year-end maintenance and implementation of new equipment at new automotive parts line in Germany.

*Hydro traditionally reports in EBIT for difference from most other companies who report in EBITDA.

There is nothing new in Rusal’s long-term strategy, especially related to its position compared to the main competitors. Rusal retains the title of the world’s largest aluminium company (outside of China), having one of most cost effective production lines and enjoying one of the lowest carbon footprints in the industry. Some of its key priorities include: the development of new alloys and products, increasing the share of value added products, improvement of operating efficiency and adapting flexibility to the market environment, and expanding sales in Russia and CIS countries. Rusal plans to launch new downstream facilities in Russia with the assistance of external partners, using the infrastructure of mothballed smelters as a first priority.

As the result of significantly increased electricity costs, railway transportation costs and other key raw material costs, as well as the appreciation of Russian ruble by 6.7% compared to the previous quarter, Rusal’s production costs of the aluminium segment increased slightly in the first quarter to US$ 1425 / tonne, compared to US$ 1344 / tonne in Q4 2016. Despite this, the company managed to maintain steady adjusted EBITDA margin at a level of 20.7% and a leverage ratio below 3.5.

In February, Rusal completed the debut offering of a US$600 million, 5-year Eurobonds with a coupon rate of 5.125% per annum, which was followed in March by the first tranche of 3-year, RMB1 billion Panda Bonds – placed at the Shanghai Stock Exchange (with put option after 2 years and a coupon rate of 5.5% per annum). The bonds’ proceeds were applied for the partial refinancing of Rusal’s existing pre-export finance facility, extending the Group’s debt maturity profile and decreasing exposure to interest rate risk.

It is interesting to point out that while Rusal had the lowest revenue among the Big 4 in 2016, it also had the highest net profit.

Unlike the other three companies mentioned in this report, the aluminium segment of Rio Tinto is a part of a large and diversified mining company, the second largest in the world with revenues of US$ 33 billion in 2016. The aluminium unit accounts for about a quarter of Rio’s total revenues. The company continues to focus on productivity, cost reductions and capital discipline in order to maximise its cash generation and the return on every dollar it invests. Still, the company will focus only on the highest returning assets in its preferred industry sectors and is seeking to exit assets that do not fit these criteria, an experience that also applies to its aluminium unit. 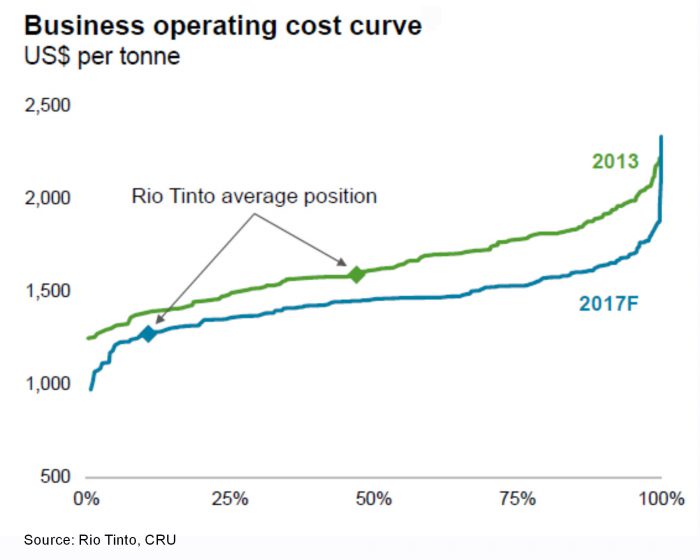 Rio Tinto is the largest bauxite producer in the world. Its strategy in the bauxite business is capturing value from expanding seaborne demand. This involves continuing to enhance performance and output at current operations while developing Tier 1 growth opportunities such as the Amrun project. In the aluminium unit, Rio is focusing on leveraging its low production costs – first-quartile average cost smelter, low-carbon and low power consumption position – to the company’s significant and sustainable competitive advantage. The three product areas are supported by a single global commercial organisation that focuses on maximising value from mine to market, while providing customers with higher-margin, value-added products and services.

In 2016, Rio Tinto completed the sale of its Carbone Savoie cathode blocks business in France, and its Lochaber smelter and hydropower facilities in the UK. The divestments reflect the aluminium unit’s determination to continue refining its portfolio to ensure the most effective use of capital, as a part of Rio’s long-term strategy.

Almost 80% of the aluminium unit‘s total power needs are supplied by low-carbon sources, with 55% coming from self-generated hydropower, compared with an average of 35% for the industry. This GHG-footprint is 50% lower than the global industry average, thanks to low-carbon sources of electricity and world-leading technology.

Rio’s 2016 aluminium production was 10% higher than in 2015, largely thanks to upgraded Kitimat smelter in Canada.

Savings realised over the past four years total more than US$ 1.6 billion, further entrenching the group’s superior integrated EBITDA margins.