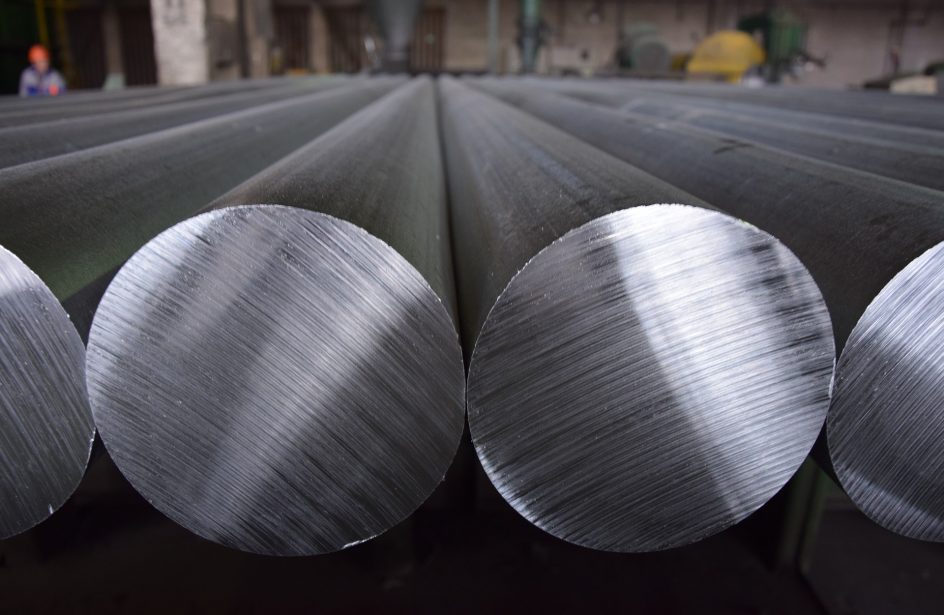 It’s been a rocky year for metal prices. The second half of the year, especially November and December, were quite a disappointment, and all five LME traded base metals are on track to post yearly drops. The main reason for this negative market sentiment is the lasting uncertainty over U.S.- China trade sanctions and the fear that it will hurt demand for metals. 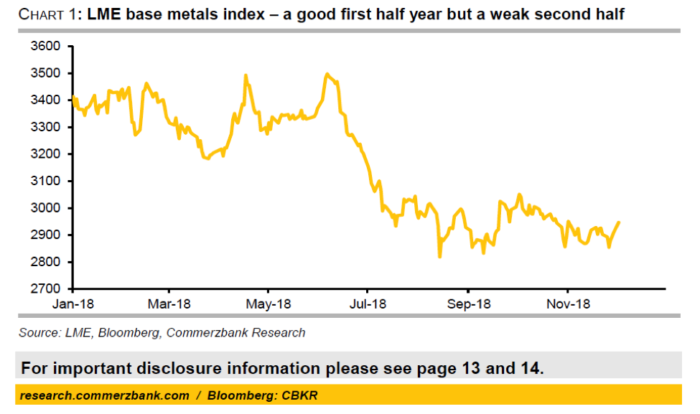 When it comes to aluminium, downward pressures came from the implementation of Section 232 import tariffs in the U.S. and the sanctions passed against UC Rusal. The latest update delivered by the Treasury is that the general license for doing business with the Russian company has been extended for a fifth time, with the latest deadline slated for 21 January 2019. Consequently, the aluminium price continued to trade below US$ 2000 /tonne during November and the first half of December.

Production disruptions affected half of Norsk Hydro’s Alunorte’s Brazil operations – the world’s largest alumina refinery. The threat of the plant’s complete closure in September added not just uncertainty to the already confused and fearful aluminium market, but also huge volatility due to the potential shortages to the world’s alumina supply that could have resulted. As a result, alumina prices jumped rapidly to extreme levels: Australia’s Fob index traded around US$ 400 /tonne in early December, after falling from US$ 640/ tonne in September.

Next, another factor contributing to growing uncertainty and falling prices was the recent arrest of the CFO of China’s largest telecommunications firm Huawei, in Canada, at the request of the U.S. for alleged violations of the Iranian sanctions. The latest news is that Meng Wanzhou has been released on bail. This unexpected situation disrupted the optimism that followed the trade war ceasefire signed for 90 days between President Donald Trump and Chinese President Xi Jinping during talks at the G20 summit on December 1st. Markets remain sceptical, however, that a full resolution of the trade dispute between the two largest economies will be achieved anytime soon.

2018 was also the year that saw a marked increase in Chinese exports of unwrought aluminium and aluminium products (mostly semi-finished products). According to customs data, the Middle Kingdom exported 536,000 tonnes in November, up by 54,000 tonnes from October. On a yearly basis, November’s exports jumped 41.1%. This brought the figure for January-November up 20.2% from a year earlier, to 5.28 million tonnes.

This shows that the punitive Section 232 tariffs have been so far unable to slow China’s aluminium exports. Moreover, Beijing decided to tweak its tax rules to facilitate even more exports of aluminium semis. A value-added tax (VAT) rebate on such exports has been raised from 13 to 16 %. Since Chinese VAT stands at 17 %, this amounts to almost a tax-free export pass.

On top of this, the yuan’s depreciation, as well as trade uncertainty in overseas markets, prompted firms to rush out shipments, driving up aluminium exports in November. A Singapore-based source told Fastmarkets that China’s coil exports were contributing to the downward pressure on the market. Similarly, a Hong Kong-based source agreed, noting that China continues to aggressively sell “fake semis” into the market, which is cutting into the demand share of primary aluminium metal.

After all, the steady rise in Chinese exports is a reminder that the core imbalances in the global aluminium market have so far been left untouched by increased U.S. tariffs and duties. 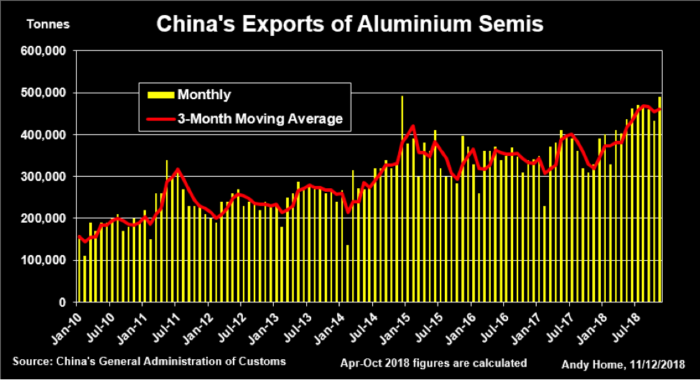 It’s also interesting to mention that, at the same time that aluminium exports are rising, China’s copper imports hit 456,000 tonnes in November, up 8.6 % from October but down from 470,000 tonnes a year earlier. Copper concentrate imports fell 4.6 % year-on-year to 1.699 million tonnes in November.

… and China’s exports and installed capacity will keep rising

Nevertheless, SMM expects the global aluminium market to be amply supplied next year. It cites CRU, which stated production will expand significantly and that the market should remain oversupplied in 2019. But most of the capacity increases are expected to take place in China. In November and December 2018 about 0.79 million tonnes of new primary aluminium capacity is expected to be commissioned. Overall for 2019, primary aluminium capacity is expected to grow by around 3 million tonnes in China, according to SMM figures. This factor will likely keep Chinese exports at high levels and might even lead to their further increase.

As alumina prices declined, the average full cost across Chinese primary aluminium smelters fell to 14,600 yuan/t (US$ 2120/t), as of December 7th. This narrowed losses across aluminium producers, to 1,179yuan/t (US$ 171/t), SMM calculation showed. For the week ending December 7, domestic alumina prices fell 0.98% to 3,037yuan/t (US$ 440/t), while FOB Australia prices held stable at US$ 400/t. The alumina market is expected to turn into a supply surplus and the global oversupply of alumina may reach 1.765 million tonnes in the first quarter of 2019.

During China’s forthcoming annual policymaking conference, a gathering of Chinese state leaders, ministers, provincial governors and senior advisers, President Xi Jinping is expected to unveil the 2019 economic plans. The focus will be on coping with a slowing economy, while tax cuts, fiscal stimulus and greater market openings are expected to be discussed. So far, fresh stimulus measures worth 4 trillion yuan (US$579 billion), including tax cuts, special bond issuance and state funds, have been announced for 2019 to offset external uncertainties.

A sustained backwardation in the London Metal Exchange’s December/January spread (US$ 15/tonne) pushed premiums in Europe and Japan down in the week ending December 11, according to Fastmarkets. Premiums in the United States and Brazil were unchanged amid quiet trading conditions. The benchmark Rotterdam in-warehouse P1020A duty-unpaid premium dipped to mostly around US$ 65-70 per tonne, down from US$ 70-75 per tonne on December 4. The spot main Japanese ports (MJP) premium fell to $65-75 per tonne on Tuesday December 11, down from $70-80 per tonne a week ago.

Final remarks and outlook on 2019

The aluminium price fell further on December 14 to US$ 1908 /tonne, risking to finish the year below US$ 1900/ tonne, the lowest level since July 2017. Metal prices have also reacted to Euro/Dollar exchange rates (currently at 1.13).

The estimated market deficit this year is in excess of 1 million tonnes globally, registered mostly ex-China. So how is it possible then that aluminium prices are falling? The truth is that aluminium exports from China are nearing 6 million tonnes this year. As a result, not only is there no real global aluminium deficit, but the markets are in fact oversupplied. The relative weakness of aluminium prices will remain for as long as exports from China remain at current elevated levels.

China’s primary aluminium output actually rebounded in November after three straight months of decline. Many analysts were surprised by the rise, as they were expecting further reductions as a result of the winter production curbs meant to reign in air pollution. The world’s top aluminium maker produced 2.82 million tonnes of the material last month, data from the National Bureau of Statistics showed. That was up 3.9 % from 2.72 million tonnes in October and up 19.2 % from November 2017, the bureau said. However, IAI data will probably show even higher figures since those include and data from unreported production.

U.S. aluminium import tariffs have therefore failed to hurt overall Chinese exports, and even helped exports from China and Russia to be more competitive in several markets, such as South Korea or Japan. A secondary effect is that products containing aluminium (such as cars or airplanes) manufactured in these markets have also become more competitive compared to American alternatives, strictly because input costs are lower.

Norsk Hydro expects global primary aluminium demand to grow by 2% to 3% in 2019, down from the 4% seen for 2018, a trend that is expected to last for the next 10 years. The U.S.-China trade dispute remains the strongest headwind for both global and Chinese economic outlooks. It is widely expected as a result that both sides will reach an agreement around or before the 90-day truce lapses.

Another looming risk is that the UK economy could contract by as much as 8 % next year in the event of a no-deal Brexit, according to the Bank of England. While that risk decreased somewhat after British Prime Minister Teresa May survived a no-confidence vote, the situation is still unclear.

Another positive factor for aluminium markets in 2019 is the hope that the UC Rusal situation will be solved, as the continued extensions of the sanctions deadline shows the U.S. government does not want to cause any more harm to the industry.

The U.S. government is also expected to adjust the Section 232 tariffs since aluminium from China is still reaching the country thanks to the exemptions that some aluminium consumers have managed to secure. According to some reports, hundreds of thousands of tonnes of Chinese aluminium made their way into the US under this mechanism.

Taking all of the above into consideration, it is therefore reasonable to expect better times next year for the market and aluminium prices compared to the last quarter of 2018. The LME aluminium cash price should average around US$ 2115 /tonne in 2018. From this point of view, any average for aluminium price in 2019 close to that value should be seen as a success.