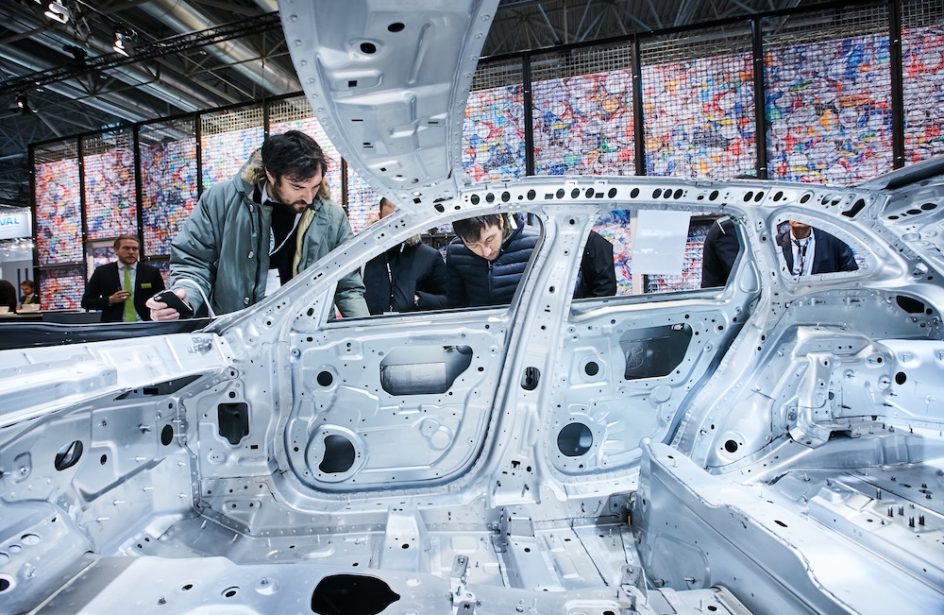 Aluminium 2016, 11th World Trade Fair and Conference recently concluded in Düsseldorf, Germany. Also known as Aluminium Messe Dusseldorf, the biennial conference is considered the biggest and most influential aluminium fair in the world.

Organized by Reed Exhibitions Deutschland GmbH, the conference featured 992 exhibitors from fifty-eight countries, and was attended by almost twenty-five thousand visitors. Participation numbers were up across the board this year – more exhibitors, more visitors, and a greater cross-section of the world’s nations in both categories made this year’s conference a success by all measures.

The international flavor of the conference was clear as well. Just under two-thirds of exhibitors were from abroad. Exhibitors from within Germany totalled 354, Italian exhibitors came to 116, China sent ninety exhibitors, Turkey was represented by sixty-seven exhibitors, and twenty-nine exhibitors travelled from Spain. The United Kingdom and the Netherlands both sent twenty-eight exhibitors each, twenty-three exhibitors hailed from the United States, twenty-two came from Canada, and France, Austria, and Switzerland each sent twenty-one exhibitors.

In addition, the outlook for the aluminium industry was up as well. Almost two-thirds of responding attendees expected demand to continue increasing over the medium term. Experts in the industry agree with the assessment, forecasting an increase in demand of between sixty and seventy million tons over the next four years. “This demand occurs mostly in the transport sector, where demand for aluminium will go up by six per cent in 2016. Low-CO2 mobility is an important component of Europe’s strategy for a sustainable economy – and aluminium is part of the solution,” explained the director general of the European Aluminium Association, Gerd Götz.

The conference featured over forty speakers during its three-day span and was divided into five sessions, each dedicated to a single subject: Aluminium Markets, Surface, Automotive, Recycling, and Plant & Processes. Delivering speeches and presentations to the assembled attendants were representatives from some of the world’s top aluminium countries, including Constellium, Novelis, and Aleris. Trade associations were well represented, too – both the German and European aluminium associations sent representatives to address the conference.

Among the speakers to address the Markets segment was Goran Djukanovic, Montenegrin industry expert and representative of Aluminium Insider and Montenegro. His third appearance as a speaker at Aluminium Düsseldorf (not including Aluminium Essen 2008), Djukanovic’s presentation was entitled “Aluminium vs. Steel in Automobiles.”

A significant take-away from the conference is contained within the presentation given by European Aluminium’s director general Gerd Götz regarding aluminium’s forecasted growth. According to official trade data released at the conference, overall aluminium demand is increasing on average by two percent year-on-year.

“Our forecasts for 2016 and 2017 show steady growth in both production and demand across the aluminium value chain in Europe,” explained Götz. “Clearly aluminium is the preferred material for applications with strategic value for a sustainable economy, such as transport, packaging and buildings.”

European Aluminium sees continuing growth for the continent going forward. Even in the face of overcapacity from the People’s Republic of China, the Association sees a 1.1% growth rate for 2016 and a 1.7% rate in 2017.

Recycling is also rising with the aluminium tide, jumping by a full 5% each year for the past several years in Europe. This despite the fact that a significant volume of secondary raw material escapes the continent – according to the Association, 860 thousand metric tons of scrap aluminium departed the continent’s shores last year, most of which to ports in Asia.

“These growth rates reflect a need for a lightweight and durable material such as aluminium,” Götz opined. “This need is particularly visible in transport, where aluminium demand will increase by 6% in 2016 for the second year in a row. Low-carbon mobility is absolutely essential to Europe’s strategy for a sustainable economy and aluminium is part of the solution.”

Götz fleshed out the ‘significant challenges’ facing the sector by highlighting Chinese overproduction and its exertion of ‘downward pressure’ on global aluminium prices, placing the aluminium value chain ‘at risk’ as a result.

Several firms were recognized at Aluminium 2016 for their significant contribution to the aluminium sector over the past year. Among those selected for recognition was Atlanta’s Novelis, who was presented with the European Aluminium Award for its part in the development of the Recycled Aluminium Car (REALCAR) project, launched in 2008 in conjunction with Jaguar Land Rover.

The REALCAR program is an initiative to create a closed-loop automobile production model, with the aim that the unit is recycled at the end of its useful life. In the eight years the program has been in existence, the results have been significant – Jaguar Land Rover has recovered over 50,000 short tons of scrap aluminium last year alone.

This, too has become ubiquitous on Jaguar Land Rover lots. First used in the Jaguar XE series, the new alloy can be found throughout the Jaguar family of automobiles.

“We are honored to be recognized for our leadership in alloy innovation and aluminium recycling with this prestigious award,” said senior vice president of Novelis and president of Novelis Europe Emilio Braghi on receipt of the award. “This prize is a testament to the skills and talent of our people, who are constantly working to develop new alloys, innovative applications and revolutionary designs that leverage the unique properties of rolled aluminium. It also honors the close partnerships we build with our customers to ensure the next generation of vehicles is built to maximize the attributes of aluminium.”

Aluminium 2016 was the site of product debuts as well. Among the more significant was Alcoa’s introduction of the Sustana line of aluminium products. Produced through low-carbon emissions and containing significant recycled content, the Sustana line is intended for end users who are looking for products that are even more sustainably produced than average aluminium.

The Sustana product family consists of two main products – Ecolum and Ecodura. Ecolum is primary aluminium produced using smelters powered via hydroelectricity. Both the smelter and the power plant have a production ratio of 2.5 metric tons or less of carbon per metric ton of aluminium. Such a ratio is significantly better than competing products – according to Alcoa, this is a full 75% better than the industry’s average.

Ecodura is an aluminium billet made from significant recycled content. Intended for customers desirous of products with low-carbon content, this billet is made from at least fifty percent recycled content, meaning it uses up to 95% less energy than similar products made using virgin material. In addition to high recycled content and low energy use, Ecodura also contributes to sustainable building projects like LEED (Leadership in Energy and Environmental Design) and BREEAM (Building Research Establishment Environmental Assessment Method) certifications.

“Companies across a range of end markets have made sustainability a core business imperative and, as a result, they’ve prioritized the use of low-carbon aluminum products with proper certifications,” explained the president of Alcoa Cast Products Timothy Reyes. “By introducing these eco-friendly Sustana products, which offer significant sustainability benefits when compared to the industry average, Alcoa is underscoring its commitment to helping customers reduce their environmental footprint.”

“This global product launch also builds on our own long-standing commitment to sustainability, which includes several noteworthy reductions in our own carbon footprint,” he concluded.

The next edition of ALUMINIUM, 12th World Trade Fair and Congress is scheduled to take place in Düsseldorf from October 9 to 11, 2018.