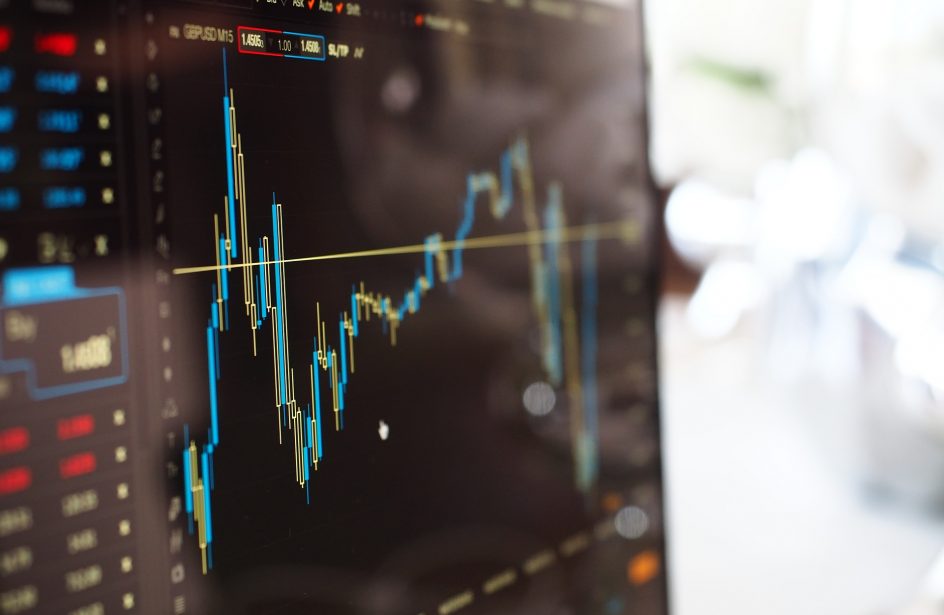 Aluminium has been the top-performing base metal this year, prices climbing 25 % so far, largely due to China’s determination to shutter illegal smelters, and cut production of aluminium and alumina by 30% in four provinces around Beijing during the winter, to curb pollution. After reaching the its highest level in five years of US$ 2187/t on November 1, the LME aluminium price fell to US$ 2060 /t on November 21, before recovering to US$ 2109 /t at the start of last week in November. All these ups and downs were a direct function of developments in China. But for all the seesawing, aluminium prices will most likely remain strong. Let’s have a look at key market fundamentals. 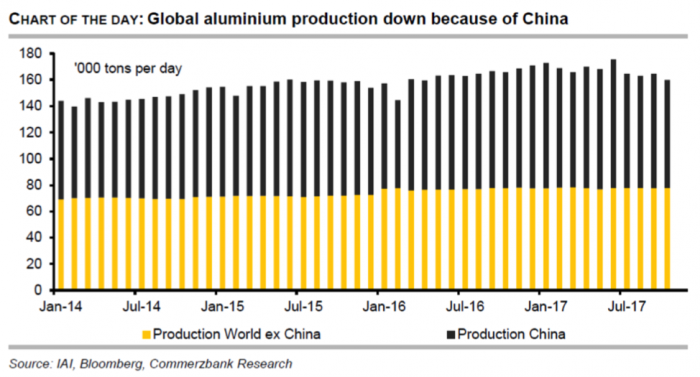 The inventories of aluminium in China are rising, making analysts’ conclusion that there is no shortage of the metal on the market and that on-going production cuts are already included in the price. However, over the past several years, rising inventories were not always a consequence of lower demand and high oversupply on the Chinese market but of higher demand for molten metal. The aluminium stocks in the warehouses Shanghai (SHFE) grew to a record high of nearly 700,000 tonnes, increasing seven-fold since the start of the year.

At the same time, stocks for LME registered warehouses are falling, both in Asia and Europe, which have hit the lowest level since August 2008 (at 1.15 million tonnes). However, some analysts and traders believe the metal is moving to cheaper non-LME warehouses, so the decrease is not only the result of shortage of aluminium on the market.

In Europe, there was talk about whether potential supply tightness could emerge over coming months. European stocks accounted for 47% of total LME stocks as of November 20.

“The European market does not seem like a market on the verge of tightness. Off-warrant stocks are around 1.5 million tonnes. Metal holders are disciplined now and they keep it. We are months away from a potential tightness,” a trader was quoted by Platts.

Aluminium and alumina output are set to dip further in the coming months as China’s first ever winter restrictions on aluminium production gather pace. A recent Reuters survey of six consultancies and brokerages showed that up to 1 Mt of the light metal could be cut during the 4-month heating season in northern China. That works out to as much as 3 Mt on an annualized basis and comes on top of the 3-4 Mt of annual capacity estimated to have closed this year as part of a crackdown on illegally-built facilities. 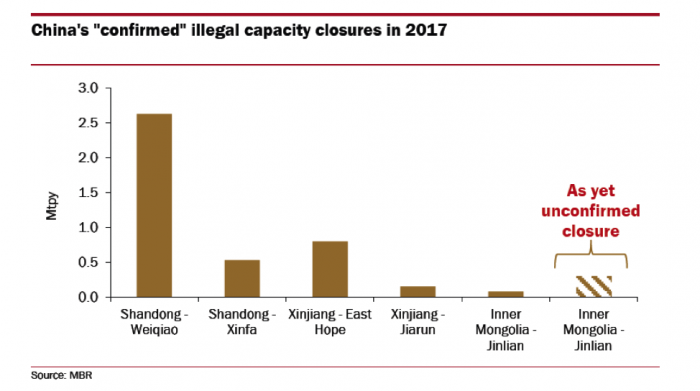 That pinch is starting to show: China’s primary aluminium production fell for a fourth straight month in October, according to the National Bureau of Statistics (NBS), hit by high costs and the closure of illegal capacity. China’s aluminium production has been declining since June’s record-high of 2.93 million tonnes following the closure of illegal smelting capacity.

Indeed, data from the International Aluminium Institute (IAI) shows that the global aluminium production decreased in October by 3.5% year-on-year to 4.96 million tonnes, which is the lowest level since February 2016. Whereas production outside China was 2.179 million tonnes, up from 2.1 million tonnes in September, it fell in China by 6.6%. Chinese daily average output fell to 82,100 tonnes in October against 86,900 tonnes in September. More cuts can be expected throughout winter as the government’s policies are being implemented, not only in aluminium but also in alumina and other raw materials.

Lu Dongliang, Senior VP of Aluminium Corporation of China Limited, said at an aluminium seminar in Fuzhou City that during this winter that the company would shut over 2 million t/year alumina capacity of its 7 million t/year total in the provinces of Henan and Shandong, resulting in an output cut of 600,000-700,000 tonnes. Chinalco, China’s biggest state-run aluminium producer, is cutting its alumina capacity by 2 Mt this winter to comply with pollution-related restrictions on heavy industry. Other producers in the four provinces also cut production, affecting over 5 million tonnes of annual production. The alumina price rose to around US$ 460/t (Fob Australia), up from around US$ 330-340 / tonne in 2016.

Chinese exports of aluminium (mostly semi-aluminium products) in October stood at 350,000 tonnes, flat year on year, but down 5.4% month on month, according to data from the General Administration of Customs.

However, in its most recent statement, Beijing Antaike, a state-run metals consultancy, forecast China’s aluminium production at about 36 Mt this year, up 10.3% from 32.65 Mt in 2016. Antaike expects China’s aluminium production for 2018 at 38 Mt, up 5.6% on year. China’s refined aluminium demand in 2018 was forecast to rise 6% to 36.9 Mt from the estimated 34.8 Mt this year, according to Antaike. The country will so remain in surplus for around 1.2 Mt in this year and 1.1 Mt in 2018. According to this firm China will have aluminium smelting capacity of around 47 Mt/year by the end of 2018. It said over 80% of China’s aluminium output capacity was equipped with their own power units, most of them thermal power ones. However, estimates vary and only time will show.

Challenges for the Chinese government

There are several questions that China’s government needs to cope with in following months. Above all, production cuts prompted by environmental concerns are a completely new policy response. It’s doubtful that the government can properly evaluate all the consequences of the “Blue Sky” program and many analysts think that the Party will balance strict enforcement with assessments of the actual risks faced by the economies of the four provinces target by the cuts.

Second, the government needs to prepare a strategy for the “after March 15” period, when smelters are allowed to restart production and companies will seek to maximize output to cover losses and meet production targets. Some kind of restrictions for smelters restarts should continue even after March 15 to secure gradual capacity increase and stave off a potential prpoduction glut. Otherwise, the pollution could just switch to spring months, instead of winter.

Thirdly, the government needs to count on somewhat weaker economic data for the winter and to be reflected in Q1 2018 GDP result. According to data from the NBS, industrial production in China grew by 6.2% in October, a tenth shy of market expectations. The dynamism of fixed asset investments declined further to hit just +7.3%, its weakest level of growth since 1999. The data suggest that public spending has decreased and that domestic demand has cooled noticeably, a trend that will most likely continue in the coming months.

The fourth challenge the government will encounter is moving aluminium production outside China, meaning fewer jobs for Chinese workers. For instance, China Hongqiao Group Ltd. has floated the possibility of relocating shuttered plants to other countries, with Indonesia topping the list of potential destinations. “It’s a good time to go global,” said Chen Xuesen, deputy director of the strategy development department at state-owned Chinalco, underlining the fact that Chinese smelters are not content with the largest domestic market in the world.

The war on smog has just begun and will likely run for a long time. If it does, there could yet be far-reaching implications for China’s aluminium industry, as well as for steel and other industries reliant on coal-powered plants. Faced with rising costs, China’s aluminium companies will have to invest in clean technology and energy sources, instead of focusing solely on boosting capacity in order to survive.

It will be difficult for plants without operating licences to start production in future, which should slow investments in new capacity. ICBC Standard Bank expects the rates at which new capacity comes online in China to slow to around 2.5 Mt/year in 2018, down from ~ 5 Mt/year in 2017.

Important to point out is that aluminium smelters do not stop production and restart with the switch of button – it is a costly, time-consuming process that will raise production costs for affected smelters.

Much remains to be seen during the next three and a half months the winter cuts are in place. Given their scope and breadth, it wouldn’t be surprising if unexpected situations, such as unplanned capacity closures due to lack of energy or raw material supply were to happen. But this volatility will most likely translate into higher aluminium prices.