Base metals prices were at multi-week highs during the first half of July as uncertainty after the Brexit referendum faded away, while investors, expecting more stimulus measures around the world, have reversed the short-term bets on lower prices. The LMEX base metals index climbed to a new ten-week high of 2,430 points on Monday, July 18. Metal prices rose despite the firmer but stable US dollar compared to June and despite relatively stable oil prices (US$ 46-49 /bbl for Brent crude oil) throughout most of July.

However, aluminium and most base metals prices dropped on July 18 after lacklustre rises in Chinese home prices fuelled worries about demand in the world’s top metals consumer. Latest data showed home price rises in China slowed in June for a second straight month, adding to fears that a construction-led rebound in the economy may not be sustainable, Reuters reported.

The aluminium price has been bolstered as industrial firms in China increasingly buy it in liquid form, creating a shortage of ingots, which was then reflected in higher ingot prices. The shortage was highlighted at the beginning of July after weekly data showed inventories on the Shanghai Futures Exchange (SHFE) slid 11.5 % to 163,664 tonnes. That means that SHFE inventories have tumbled by more than half from 341,615 tonnes in mid-March. 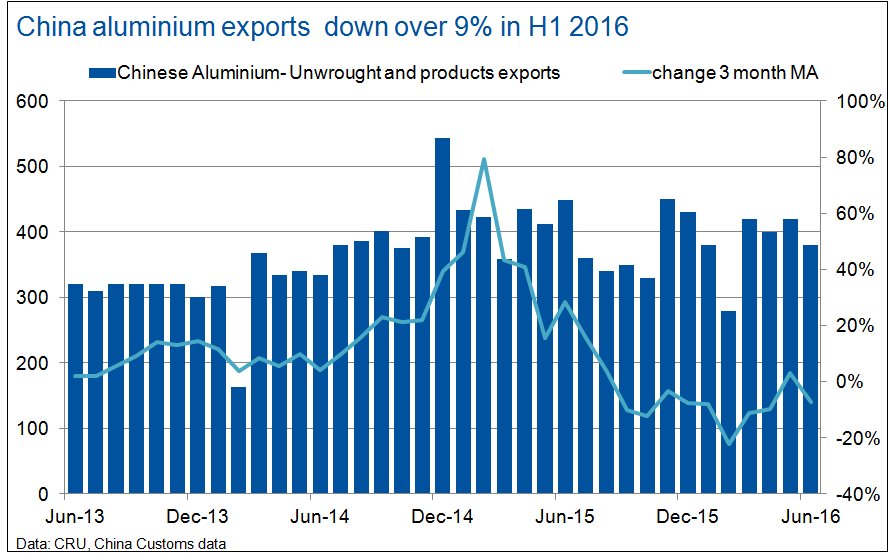 At this price majority, some 90 % of global aluminium production is able to make a profit, according to the recent data provided by CRU. That is a big improvement compared to less than 50% of global production cash positive at the beginning of the year. Aside from the higher price, a bonus of some US$ 200 / tonne compared to mid January, world smelters have additionally reduced production costs during the last twelve months. Chinese smelters have received electricity subsidies from local governments and together with technology improvements at new smelters, have significantly reduced production costs in last two years.

Though the Brexit ‘’leave’’ vote is not expected to have an immediate and significant impact on aluminum demand, it has caused a sharp fall in the British pound relative to the dollar and the euro, and if this trend continues, it could make UK alloy exports very price competitive with European suppliers.

SMM, the Shanghai based consultancy, estimates the amounts of restarted aluminium capacity in China at 400,000-500,000 tonnes during June-July. Annualized production rate has increased by almost 650,000 tonnes over the course of April and May. Smelters are reactivating capacity in response to the rally in local prices.

The amount of new aluminium capacity will depend on aluminium price movement.

Beijing-based consultancy AZ China said 3 million tonnes of new Chinese aluminium capacity is expected to open this year, of which one third is already on line, with more to come next year. “If they can’t ship semis because of WTO intervention, it won’t be long before they will be selling more finished aluminium goods,” AZ China managing director Paul Adkins said. China’s Customs data showed China exported 420,000 tonnes of unwrought aluminium and aluminium semis in May, up 20,000 tonnes MoM and 2.44% YoY. YTD exports through May totalled 1.9 million tonnes, down 7.53% YoY. 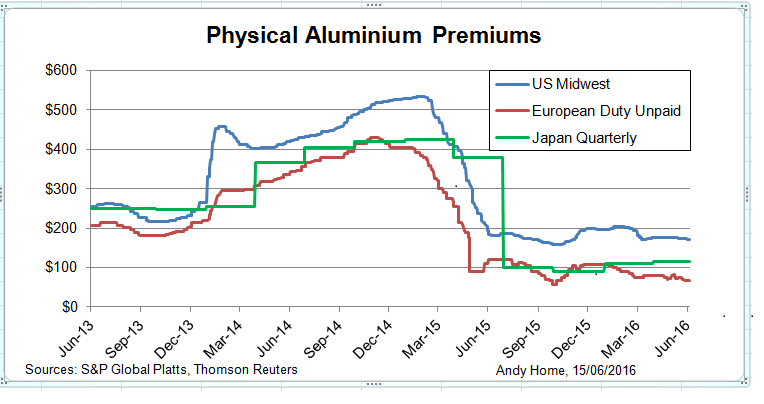 European aluminium premiums are expected to extend their recent declines due to sluggish demand and a less hospitable futures market structure that discourages financing, Reuters reported. Premiums were last quoted at US$ 115-120 a tonne for duty-paid metal in Rotterdam, down from US$ 140-150 in early February. Meanwhile, Metal Bulletin reported that the US Midwest premium has fallen to its lowest level since March 2011, at 6.75 to 7 cents per lb. on July 15, down from 7-7.25 cents per lb. a week before.

Premiums stood at US$ 80-90 per tonne cif south China.

This indicates there is no shortage of aluminium on the market at this moment and bolsters fears among market participants of further oversupply as China’s exports increase in the second half of the year. CRU expects China’s exports of value-added aluminium products to hit around 6 million this year, compared to 4.2 million tones in 2015, and to reach more than 8 million tonnes by 2020. 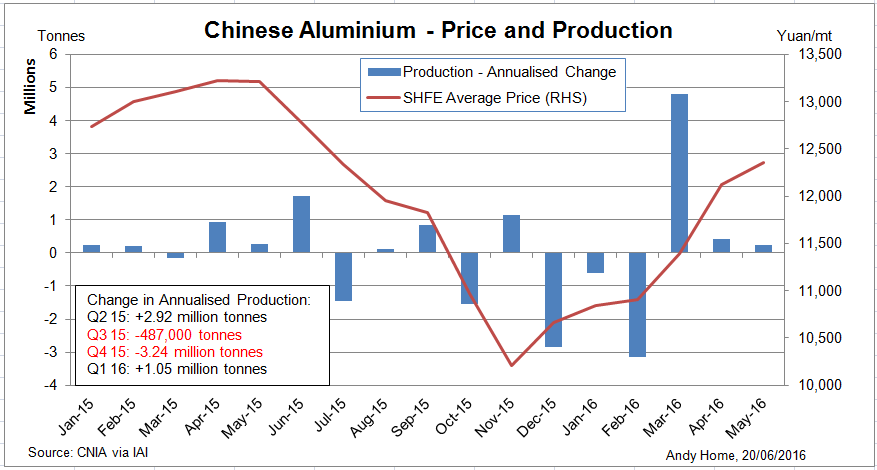 Base metal prices are expected to be higher in the second half of the year in most cases as the supply-demand situation points to deficits or lower surpluses than expected earlier this year. The main risk for the aluminium price, however, remains concern that China would continue to restart capacities temporarily curtailed at the end of last year. At the same time it means rising exports and rising tensions with global trading partners – countries and their governments. Still, some of the new power grids in China are being constructed using aluminium, which together with strong demand from constructions and automotive industry will bring support to the demand side and maybe limit exports.

Morgan Stanley expects global demand growth of 3.6 % in 2016, and combined with supply discipline will mean the aluminium market has a small surplus of 34,000 tonnes this year. The bank sees aluminium prices averaging US$ 1,543 in 2016.