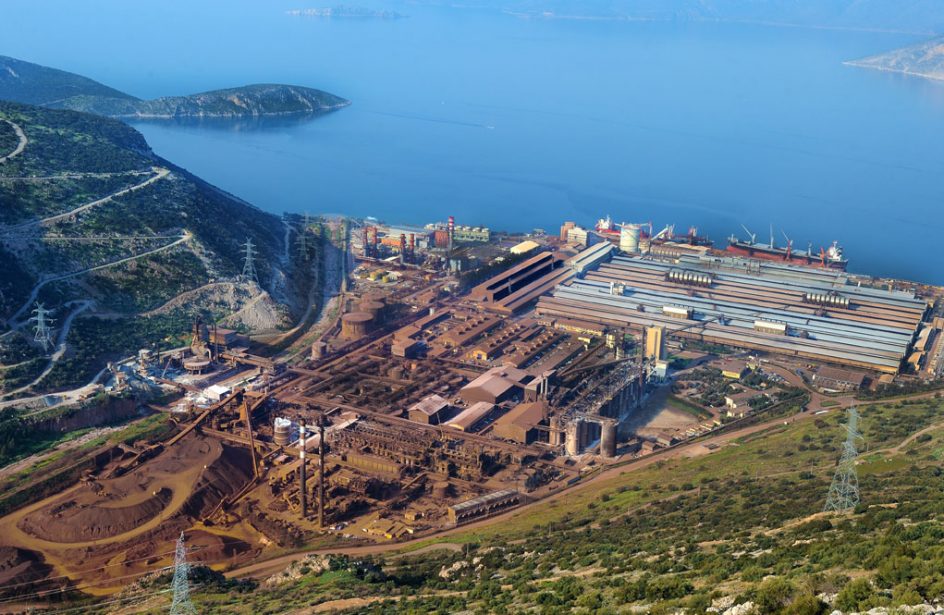 Between September 24-25, FastmarketsMB organized its annual aluminium conference in Athens. A day before the conference, in accordance with an old tradition, a one-day field trip for conference delegates was organized to the Aluminium of Greece (AoG) plant, some 180 km from Athens. The plant is nestled in a picturesque bay on the North coast of the Gulf of Corinth.

The plant, as well as the two settlements around it where staff lives, were built in the 1960s by French company Pechiney. It started operating in 1966 under the name Aluminium de Gréce (ADG), in order to exploit the vast bauxite ore deposits in the region. Pechiney was bought by Canadian company Alcan in 2003, and Alcan sold ADG to Greek company Mytilineos Group in 2005.

Many years and many upgrades later, the smelter still uses Pechiney technology to produce aluminium and is one of most efficient in Europe. AoG is the only integrated aluminium producer in Europe (and probably in the world) that has all production and refining facilities positioned at one site: alumina refinery, smelter, anode plant, power plant, cast house,  red mud filtration unit and port. What’s more, the bauxite mines are in the hills surrounding the plant. As a result, AoG is the largest vertically integrated alumina and aluminium producer in Europe – though, it must be said that Romania’s Alro has a bigger aluminium smelter capacity but its alumina refinery (Alum Tulcea), is hundreds of kilometres away from the main plant. 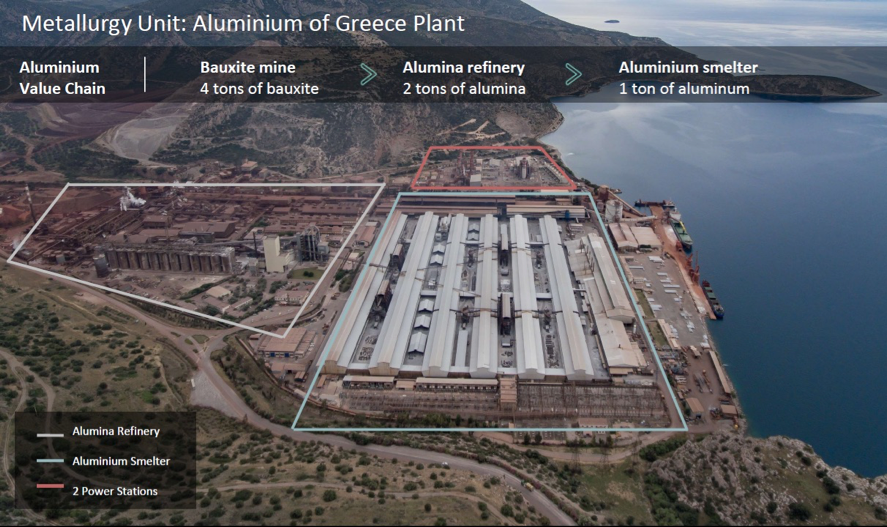 AoG recorded a turnover of € 294.6 million in the first half of 2019, which represents 29.7% of Mytilineos Group’s total turnover, compared to € 283.5 million for corresponding period in 2018. EBITDA in the first half of 2019 stood at € 92.6 million vs. € 98.9 million for the same period last year. This performance was particularly satisfactory given falling prices for both aluminium and alumina during the period. For the first half of 2019, the average alumina and LME aluminium prices fell by 17.4% and 17.3%, respectively. These declines were partially offset by the strengthening of the US dollar against the euro and by a 16% increase in the premiums for aluminium.  Most of AoG’s sales (both aluminium and alumina) are hedged and tied in multi-year sales contracts.

AoG has full ownership of the Delphi-Distomon bauxite mines, the second largest in the country, with current annual production of around 650,000 tonnes. It is located in the nearby Amfissa region and employs around 100 people. Despite the fact that the area is rich in bauxite with over 100 million tonnes (Mt) of proven reserves (out of a total of 650 Mt in Greece), the company started importing tropical bauxite in 2000 (hitting around 400,000 tpy in recent years) that is mixed with Greek bauxite in a process called “sweetening”. The reason for this is to facilitate the Bayer process as Greek bauxite has a relatively high content of silica which is more difficult to process. Thanks to “sweetening”, the production process uses less energy and caustic soda, lowering costs.

The alumina refinery produces around 835,000 t/y of mostly metallurgical grade alumina (a smaller hydrated part is sold to the chemical industry), processes over 1.4 million tonnes of Greek bauxite ore (*) and 0.4 million tonnes of imported /tropical bauxite (mainly from Africa) under a long term (extended) purchasing contract with Glencore.

In order to reduce costs and increase efficiency, AoG has embarked on a number of cost cutting programs. As a result, 2018 EBITDA reached a record high of € 166.0 million (30.2%), driven by increased alumina prices.

Primary aluminium production costs are around US$ 1650 /tonne and belong currently to the second quartile of the global cost curve. Electricity costs account for roughly one third of the smelter’s production costs. The renegotiation of the electricity supply contract with state-owned PPC in 2016 was the key driver of the cost reduction for the company in the years since. 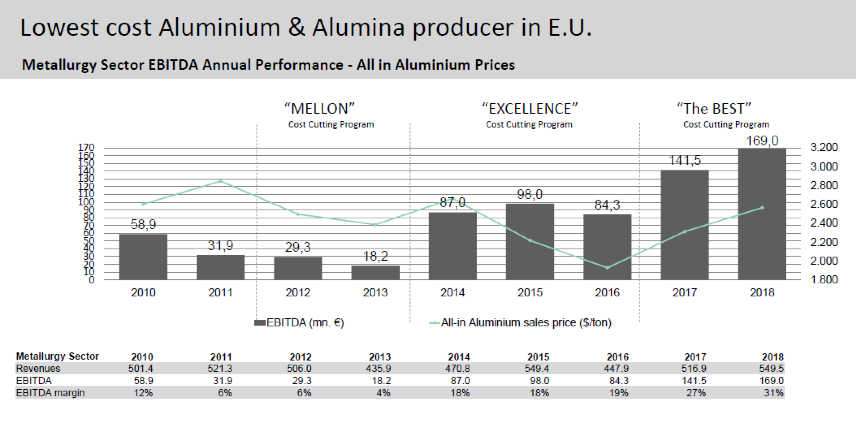 Around 44% of the alumina expected to be produced in 2019 (365,000 t) will be utilised internally for the production of aluminium, while the remaining 56% (470,000 t) will be exported under long-term off-take contracts. The alumina production costs are around US$ 230/t, out of which some 40% represent bauxite costs. It is positioned in the second quartile of the global cost curve. The upgrade and expansion plan for the alumina plant, aimed to increase production to over 1 million tonnes/year is undergoing technical approval with final decision scheduled for the first quarter 2020. 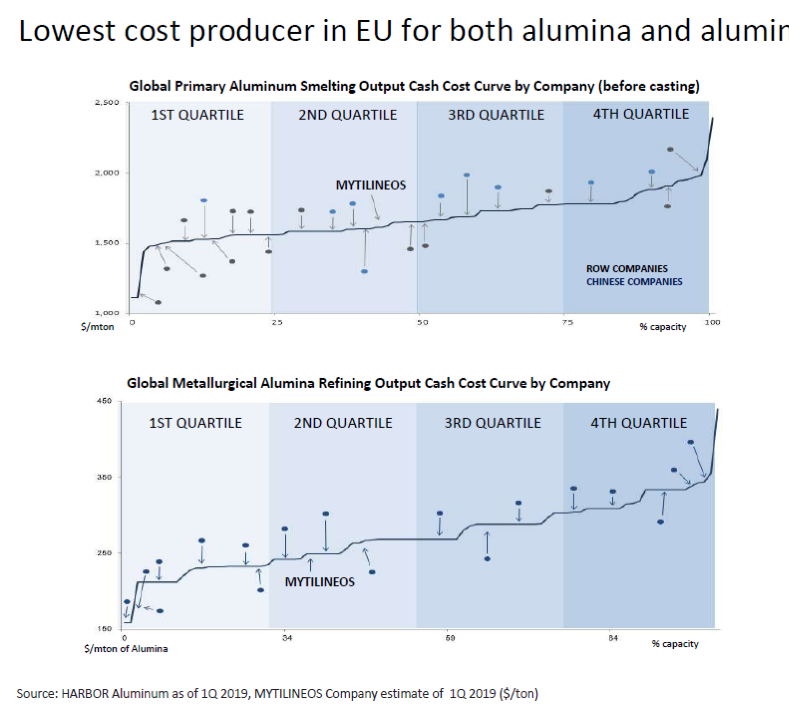 AoG currently purchases electricity from Greece’s PPC (the national electricity distributor) at negotiated prices with a contract that expires at the end of 2020. The purchase price is € 37.5/MWh (according to the Edison Investment Research, confirmed by Mytilineos), as long as the aluminium price stays below US$ 1800/tonne (+€1.25/MWh for each $100/tonne above that level). The Mytilineos Group believes that similar pricing conditions will continue post-2020.

The 334-MW high-efficiency combined heat and power (CHP) plant, or cogeneration plant, is located within the complex of the plant. It is connected to the regional gas pipeline that comes from Russia and across Bulgaria to Athens and the port of Piraeus. The plant came into operation in 2008 and, apart from electricity, produces steam which is used in the alumina production process.

A second plant entered commercial operation in June 2011 and is a 444.48 MW Combined Cycle Thermal Power Plant (CCGT). All electricity is delivered to PPC and then sold back to AoG. Russian gas still dominates Greek imports, but rising LNG imports (including from the U.S.) and new pipeline capacity should diversify imports and lower prices.

Technical features of the electrolyses

AoG uses the most advanced Pechiney technology, a point-feeder system, enclosed pot cells and pre-baked anodes. The electrolyses has 3 potlines with 780 pots in total. Potlines A & B (started in 1966, 520 pots), operate at 77.5 kA and potline C (started in 1971), at 107.7 kA. Today, AoG’s annual capacity of liquid aluminium is around 185,000 tonnes with a current efficiency at 93.8% and specific energy consumption (SEC) of 13,450kWh/t of aluminium. Average pot life is around 100 months (more than eight years). Consumption of anodes is 410 kg/tAl, aluminium fluoride 9.9 kg/tAl, alumina 1,895 kg/tAl, so the plant has some of the lowest specific consumption of raw materials and consumables compared to other producers in South East Europe.

The anode plant has a production capacity of 94,000 tpy of prebaked anodes. The liquid metal produced by the potlines is alloyed and formed in billets and slabs (with production at 120,000 and 80,000 tonnes, respectively).

The plant’s port is capable of accommodating and serving ships of tonnages up to 50,000 tonnes. It is equipped with two electric rail cranes, an alumina ship loader and all necessary storage facilities for raw materials and products.

Virtual sensors facilitate the ongoing evaluation of parameters such as temperature and chemistry which helps to anticipate the health and condition of the pot, providing operational recommendations for smelter optimization.

This was the author’s fourth visit to AoG. On several occasions, AoG was the subject of the author’s numerous company reports and conference presentations in the context of overviews of South Eastern Europe’s aluminium industry.