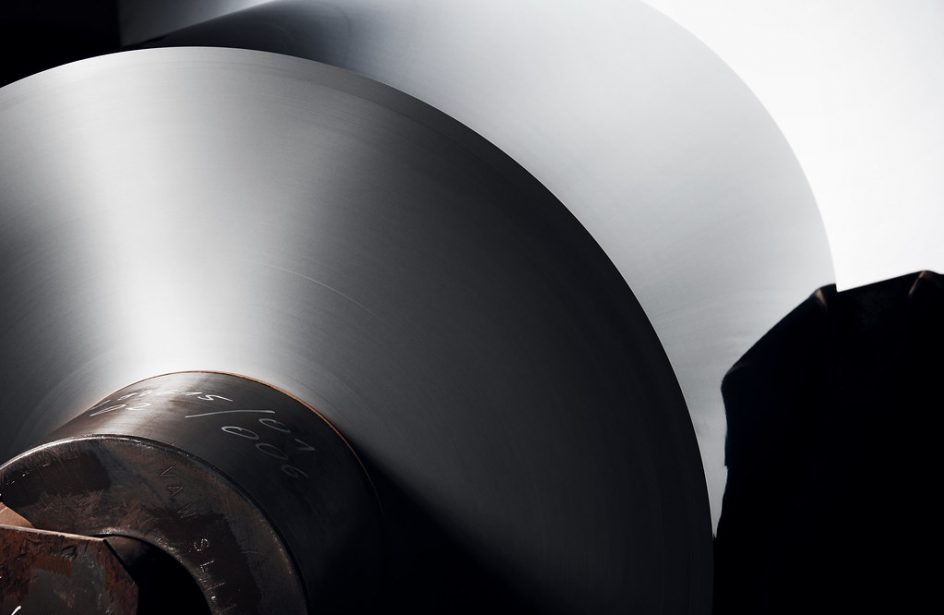 Base metals prices reacted positively to the progress registered in the latest round of US – China trade talks in mid-October, but the markets remained cautious about the prospects for a final agreement.

Other than nickel and lead, base metal prices have been trading lower this year, with aluminium the second worst performer, and tin last. The reason for this is a well – or otherwise – oversupplied market, slowing global growth and exhaustion from the prolonged US-China trade negotiations. The latter remains the main contributor to depressed markets and metal prices.

China’s gross domestic product growth slowed to 6.0% year-on-year in the third quarter, its weakest pace in almost three decades. Industrial activity is expected to have shrunk for the sixth month in October, a Reuters poll showed, suggesting hardly any relief from slowing global demand and the trade war.  The latest economic parameters in the EU and the US also indicate slowing growth.

Despite some encouraging signs, aluminium price has extended its weakness in October (4th quarter), trading in the range US$ 1696-1738/tonne. Production cuts in China and falling inventories indicating market deficits and seasonally higher demand towards the end of the year, did not manage to boost LME prices. However, the latest forecasts indicate that the demand growth for aluminium will be between 0 and 1% y/y, while CRU Group predicts the market to shift into surplus in the fourth quarter with 185,000 tonnes, after deficits of 1.286 million tonnes in the second quarter and 467,000 tones in the third quarter. 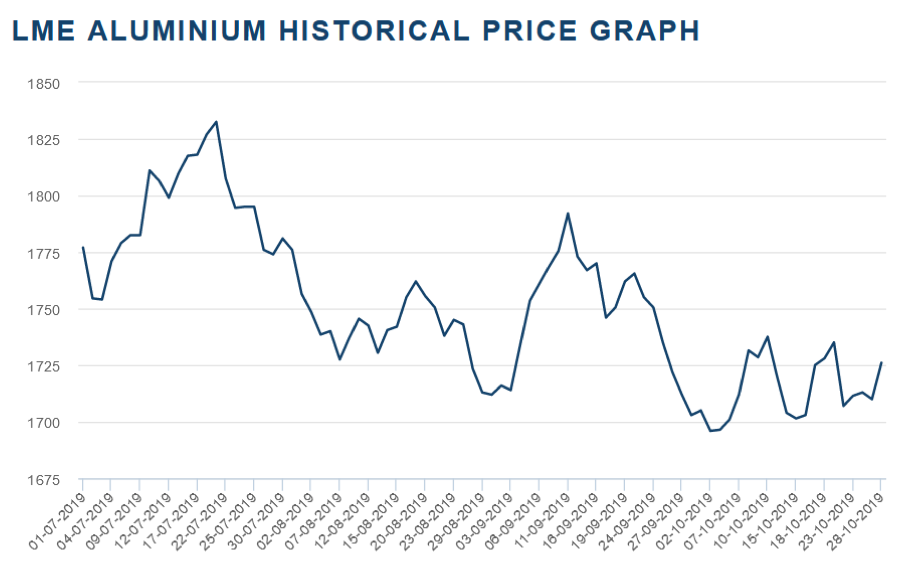 One of the conclusions of the LME Week (held between October 27 and November 1) is that a combination of weak macroeconomic data and an anticipated increase of global aluminium supplies is prompting expectations that more metal will be held in financing deals for long-term gain. What’s more, a large part of stocks is being kept in unregistered (non-LME) warehouses, which means availability is still ample.

Despite many contradictory estimates and forecasts, the consensus among all major producers is that global aluminium demand growth will be flat (around zero) this year. Norsk Hydro predicts demand outside China will fall by 1-2%, meaning that global demand is likely to fall by 0.5%. Alcoa took a similarly pessimistic view.

“Many hold the view that the western world is in a significant aluminium deficit, but we see a surplus,” Vazquez said, pointing to LME prices that have fallen by around 40% since April last year. 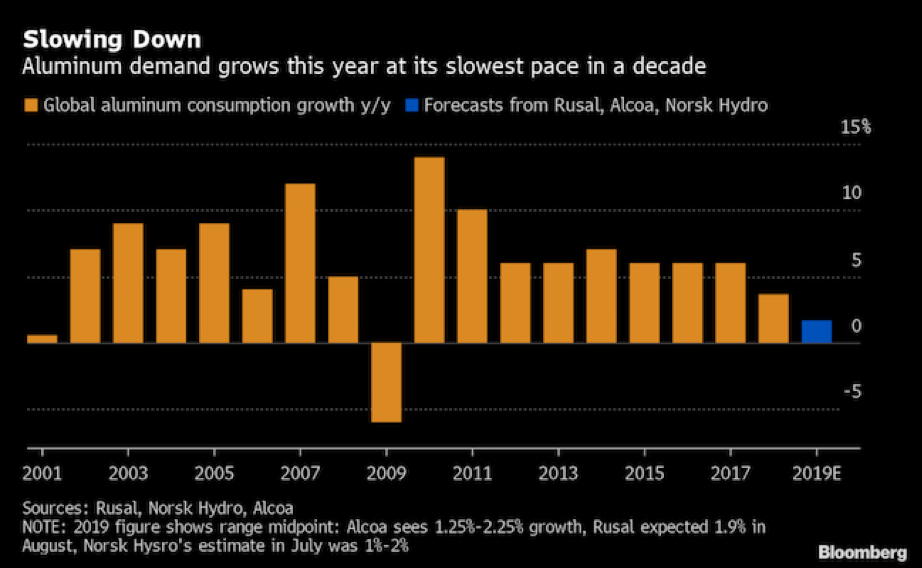 World primary aluminium production fell in September to 5.163 million tonnes, down 2.6% year-on-year and 3.12% on the month, according to the latest data from the International Aluminium Institute (IAI).

The premium for aluminium billets in Europe is holding onto the US$ 300 per tonne level, while in the United States, it fell to a record low on October 25, reflecting billet producers’ continued struggle to sell spot billets to extruders. According to Fastmarkets, the aluminium 6063 extrusion billet premium, delivered Midwest US, fell to 7-9 cents per lb ($ 154.3/t – $198.4/t), down by half a cent from the previously assessed range of 7.5-9.5 cents per lb on October 11. The latest move brings the billet premium to an all-time low,

Aluminium and other base metals prices are expected to be capped next year as weak economic growth weighs on the market, the latest Reuters poll showed (Oct. 28). The London Metal Exchange index of six base metals inched up only 1% so far this year, held back by worries about a possible global recession and the trade war. But the average is deceptive, because sharp gains for nickel of over 50% cover the fact that half of the metals are in the red, with losses of up to 15%.

Compared to earlier polls, analysts significantly lowered their forecasts for the average aluminium price next year. Aluminium prices will see only modest growth in 2020 as the market moves into surplus, hit by a combination of a slowing demand growth and continued gains in supply.

“The current demand downturn has the misfortune of being timed with the start of the strongest period for ex-China supply growth since the late 1990s,” said analyst Nicholas Snowdon at Deutsche Bank in London. “The story for 2020 is likely to be about the pace at which smelter cuts emerge to balance demand trends.” 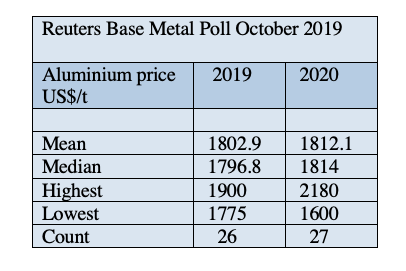 In September, China’s aluminium production fell 1.6% from a year earlier, following outages at two big smelters this summer: top producer China Hongqiao Group’s facilities were hit by flooding on Aug. 11, and Xinfa Group also closed pot lines due to an explosion a week later. Per Paul Adkins, managing director of AZ China, the Xinfa and Hongqiao incidents took about 1,300 tonnes a day from the market. Adkins also said this had been partly offset by the restart of China Zhongwang Holdings’ smelter in the north eastern province of Liaoning and a capacity addition by Xinfa in Guangxi in China’s south.

China churned out 2.90 million tonnes of the metal last month, the National Bureau of Statistics said, down 2.5% from 2.973 million tonnes in August. The daily average output still managed to climb to 96,700 tonnes per day in September, according to Reuters calculations, up from about 95,900 tonnes per day in August, which has one more day. The September daily rate was the highest since June.

In the first nine months of 2019, China produced 26.37 million tonnes of aluminium, up 1.1% from a year earlier. Shanghai aluminium prices are currently hovering around the 14,000 yuan ($1,980) a tonne mark often considered a break-even price for Chinese smelters, while spot aluminium premiums exceeded 100 yuan/t.

The current aluminium price “is just high enough above cost of production” to allow smelters to launch or resume operations after shutdowns, AZ China’s Adkins said. According to information from customs authorities, China exported 4.37 million tonnes of unwrought aluminium and semi-aluminium products in the first nine months of the year – 2.8% more than in the previous year.

Social inventories of primary aluminium in China continued to fall, as consumption remained robust. SMM data showed that stocks across eight consumption areas in China, including SHFE warrants, decreased to 859,000 tonnes as of October 28.

There is a growing tendency by major aluminium processors to use higher amounts of recycled aluminium for making their products. At the same time, there are no reliable and accurate statistics on how much new scrap goes back into the production process over closed-loop schemes, or how much old scrap has replaced orders of primary aluminium.

The bottom line is that there is enough aluminium whenever there is need for it. And it is cheap.