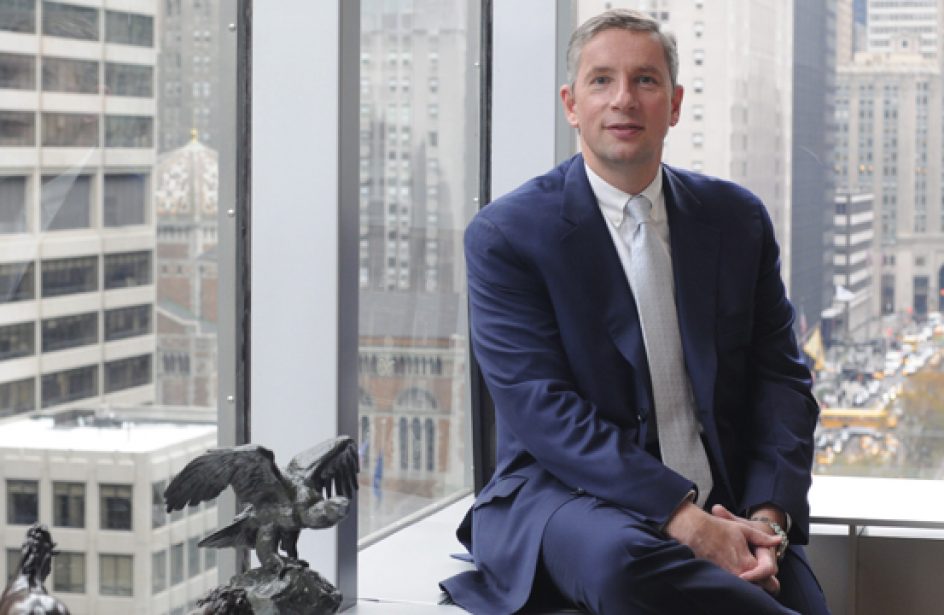 Klaus Kleinfeld, Chairman and Chief Executive Officer of Alcoa, participated in a roundtable discussion at this week’s World Economic Forum in Bern, Switzerland. In his remarks he opined that the costs and time of production of aluminium have lowered over previous years, and that the industry’s biggest limiting factor isn’t technology but humans not questioning how things can be done. As the leader of one of the world’s biggest aluminium producers, he is in a unique position to offer insights on the industry.

Klaus-Christian Kleinfeld was born in Bremen, Germany on November 6, 1957. The son of refugees who fled from East Germany, Kleinfeld grew up on the other side of the Iron Curtain in West Germany. Although he and his family lived in the West, he returned to his extended family in the East, where he witnessed the stark differences between the two countries. “I remember returning to school after these trips and trying to explain to my West German classmates the concept of freedom,” Kleinfeld said in a speech in 2003. “How difficult it was to understand if you always had it.”

Kleinfeld obtained a master’s degree in business administration and economics from the University of Göttingen when he was 24. Upon graduation he began a career as a marketing consultant. After a stint at Switzerland’s Ciba-Geigy as a pharmaceuticals product manager, he obtained a position at Munich’s Siemens AG as a marketing research manager.

At Siemens, Kleinfeld steadily rose through the management ranks. Three years after he first signed on, he founded and led Siemens Management Consulting, an internal global partner for Siemens’ businesses. SMC was a significant factor in the restructuring of several of Siemens’ business units all over the world. Not one to waste time, Kleinfeld was awarded with a PhD in strategic management from the University of Göttingen in 1992 at age 35.

Kleinfeld’s work at SMC caught the eye of Siemens executives, and in January 2001 he was promoted to chief operating officer (COO) of Siemens USA. In the United States, Kleinfeld had his work cut out for him – turn a losing business back into a money-making concern. This wasn’t just any business though, as Siemens USA consisted of divisions involved in mobile phones and telecom networks, power systems, industrial automation, lighting, auto parts, building systems, medical technology and consulting services, among others. With no formal authority over the Siemens businesses, he turned a company that lost US$553 million in 2001 to an US$810 million gain the very next year. He turned the firm around so dramatically by reducing unprofitable operations (24 when he arrived, down to eight when he finished) and implementing cost-cutting measures that saved US$100 million alone. Siemens recognized his efforts by appointing him president and CEO of Siemens USA the very next year.

In 2004 Kleinfeld was appointed to Siemens’ Corporate Executive Committee and then Vice President of Siemens AG later that year. As VP, Kleinfeld took on the task of changing the corporate culture from a traditional German one to that more closely matching the rest of the world. He refocused the corporate culture to one where the shareholders and the customers hold preeminence, and he pressured German unions to amend rules mandating a 35-hour week to a 40-hour one on the same pay. “If [German] people want to compete, they have to adjust and understand what the world is like,” he said of the changes. “I can only hope that more and more people understand that only if we are competitive will we have secure jobs and be able to offer new jobs.” Although the moves were not welcomed in many quarters, and despite the German media insisting that the moves weren’t socially responsible, the bottom line welcomed the changes with open arms – sales increased 16 percent, profits rose 35 percent, and shares jumped 40 percent in just over two years since the changes were made.

In 2006 Siemens found itself involved in a German fraud investigation. According to investigators, Siemens maintained offshore “slush funds” for use in winning contracts. Once the investigation became public late that year, Kleinfeld hired legal and auditing experts from outside the company to independently investigate the charges and to change Siemens’ internal accounting and control measures in an effort to prevent such a problem in the future. The independent investigators found that Siemens paid hundreds of millions of dollars in bribes (which was not specifically a crime in Germany until 1999), but Kleinfeld was cleared of any wrongdoing because investigators found “no indications of personal misconduct or that Kleinfeld had any knowledge of events” surrounding the bribery scandal. Charges were brought against Siemens by the United States Securities and Exchange Commission (SEC), who alleged that Kleinfeld, as a member of the then “former senior management,” were involved in “creat[ing] a corporate culture in which bribery was tolerated and even rewarded at the highest levels of the company.” Charges weren’t brought against Kleinfeld individually – rather, the United States Department of Justice cited Kleinfeld’s cooperation in the investigation and the initiation of his own investigation as factors for reducing penalties assessed to Siemens.

Kleinfeld left Siemens after twenty years and was named Alcoa’s president and chief operating officer two months later, then made chief executive officer less than a year after that. He was named the firm’s CEO on the cusp of a national financial downturn that took the aluminium industry with it. In order to overcome this, Kleinfeld began a program at Alcoa to turn it around by focusing upon strengthening cash flow. He also presided over a joint partnership with Saudi Arabian Mining Company, Ma’aden, to build the world’s lowest-cost aluminium smelter. These and other changes led to the firm’s stock price rebounding from under US$5.50 to US$15 in late 2010. Also in 2010, Kleinfeld was named chairman of Alcoa.

Kleinfeld’s tenure at Alcoa has seen many changes for the better. He began closing expensive and obsolete smelters in 2012 and began to diversify the company two years later. Alcoa purchased three aerospace suppliers in 2014 and 2015 in order to break into the aerospace industry, which is a move that continues to pay dividends.

Alcoa announced last year that it would split into two companies, and Kleinfeld will remain at the helm of the Value-Add Company by becoming its Chairman and Chief Executive Officer. Kleinfeld will also be the Chairman of the post-split Alcoa during the initial phase of the company’s existence, so as to facilitate the transition.