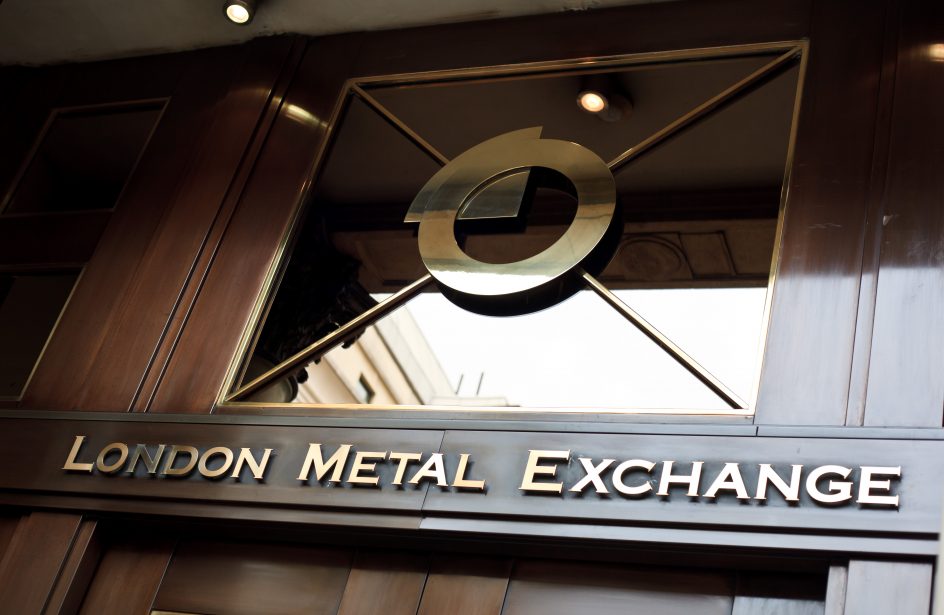 Between October 28 and November 1st, London hosted the traditional London Metals Exchange (LME) Week gathering of analysts, brokers, traders and industry experts from all over the world to hear and exchange information on latest developments related to base metals and their outlook for the next year. The main event is the LME Seminar, which features speakers presenting each of the base metals traded on the LME, as well as some hot topics such as the global economic outlook, electric vehicles, or U.S. import tariffs.

There are a number of other side-conferences with presentations on similar topics, organized by leading banks and research institutions, on various locations in London and often held in parallel. Finally, there are a number of dinner and lunch gatherings, mainly for business partners (by invitation), and cocktail parties, at the end of day, where several thousand guests have the opportunity to meet and unofficially discuss.

Below is a brief selection of some most interesting statements and conclusions related to the aluminium market and its price outlook.

“Many hold the view that the western world is in a significant aluminium deficit, but we see a surplus,” Vazquez said, referring to LME prices and US Midwest premiums that have both fallen by around 40% since April last year and off-warrant inventories that have grown by around 500,000t in the last year. Vazquez expects the world to see its biggest ever expansion in primary aluminium capacity in the next two years, due to expansions among producers in the Middle East, India, China, southeast Asia, Russia and the US, while restarts could occur in Brazil and across Europe.

“We don’t expect aluminium demand to rise significantly over the next two years, so we expect the biggest surplus the industry has seen in a decade,” Vazquez said, adding that he expects three-month aluminium prices to average US$ 1720/t in 2020.

Fastmarkets concluded that aluminium prices spent most of the year below US$ 2000 per tonne and since mid-July have been trading below US$ 1800 per tonne, despite available stocks nearly falling to their lowest in a decade. In addition, on-warrant aluminium stocks have not exceeded 1 million tonnes since January.

Unlike Harbor Aluminium, Fastmarkets predicts this year will bring another significant supply shortfall: “We estimate that the global aluminium market will be in a deficit of as much as 1.8 million tonnes in 2019”.

The raw materials prices are significantly lower than they were a year ago, but they continue to make up a large percentage of the LME aluminium price.  Fastmarkets calculated the benchmark daily alumina index, fob Australia, at US$ 285.18 per tonne on November 1, down only slightly from US$ 285.42 per tonne on the previous day. It had not traded above US$ 285 per tonne for four weeks, since it hit US$ 288.51 on October 4. Alumina demand remains strong from China. A deal was concluded on November 1 at US$ 307 per tonne cif China, market participants said. The freight netback to fob Australia was assessed at around US$ 23 per tonne.

Over the medium-to long term – due to the capacity swap program implemented by the Chinese government under which any new capacity needs to be matched by the phasing out of the equivalent amount of old capacity, Fastmarkets expects total capacity in China to be capped, while demand growth over the same time frame will continue. “As a result, we are bullish on aluminium prices over that period”, Fastmarkets stated.

Fastmarkets expects the LME aluminium cash price to average US$ 1763/tonne in 2020. Speaking during a panel at Fastmarkets’ Base Metals seminar, as a part of the LME Week, executives from some leading aluminium producers, such as Alcoa, Norsk Hydro and EN+ (UC Rusal) who obtain most of their production from hydro energy, urged that governments, regulators and companies to work together to develop a framework to trade separately sustainably produced aluminium, competitive against metal produced from energy from coal power plants. Multilateral initiatives must be used to kickstart the green aluminium market, they said.

En+ group (owner of UC Rusal) wants the London Metal Exchange to force aluminium producers that use the exchange to reveal the carbon footprint of their material.  However, the move has been opposed by rival producers who say emissions are just one part of a wider debate around responsible sourcing that in any case is being addressed by bodies like the Aluminium Stewardship Initiative. They claim that the main reason those who are pushing the carbon disclosure idea is they want to charge a premium for the metal.

Copper, aluminium, zinc and lead are all expected to experience a demand contraction this year, according to CRU. The sector hasn’t seen this sort of synchronised downturn since the global financial crisis in 2008.  The question that CRU pointed out is whether the worse is yet to come.The research house’s base case answer is “no” but it is forecasting global industrial production growth to recover from 1.5% this year to 2.2% in 2020, with a warning of “persistently lower growth rates” ahead, relative to the last couple of years. 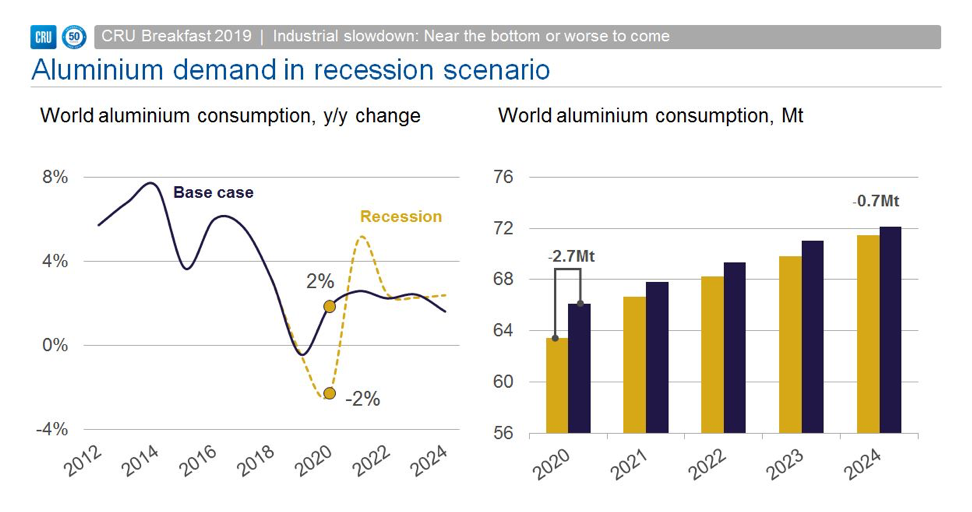 CRU assesses the possibility of an even more alarming possibility – that things could get worse if manufacturing weakness morphs into broader economic recession, particularly in the United States, at 40%. CRU is expecting Chinese aluminium production to surge by 7% next year.

Striking a different note, Caroline Bain, chief commodities economist at Capital Economics, told the LME’s seminar that: “We are cautiously optimistic for metals next year”.

Macquarie Bank believes that, while industry reform succeeded in boosting the quality of China’s total capacity, it failed to fully restrict its growth. China’s total capacity has expanded at 5 % per year during 2016-19 and looks set to expand further by 2020 to almost 50 million tonnes per annum (Mtpa) – even though China claims it will cap capacity at 45-46Mtpa. At the start of 2019, over 50 % of the global market was loss-making, while the bank estimates that this fell to just 20 % by mid-year.

For 2020, the bank forecast the global aluminium market to return to a small surplus, as supply growth outstrips demand growth – a surplus that is set to persist over the medium-term. Forecast margins should improve incrementally from 2022, on a sustained global economic recovery, boosting activity in aluminium’s key end-use sectors of property, auto and machinery – consequently tightening the market, and providing greater price support in the long run.

Aluminium products maker Constellium is increasing its recycling capability, taking advantage of the metal’s reusability to meet calls for lower-carbon output, but investments in Europe will depend on emissions rules not hurting local industry.

“We’re investing to increase our recycling capacity and we see this as a big opportunity for us in the future,” Chief Executive Jean-Marc Germain said in an interview during LME Week. Moves to reduce plastic packaging to protect the environment are starting to increase demand for aluminium packaging, the European head of Novelis, the world’s largest producer of rolled aluminium products, said.

Among conclusions heard during the LME Week was one that a combination of weak macroeconomics and an anticipated increase of global aluminium supply will result that more participants will purchase metal with the intention of holding and financing it for long-term gain.

The expected slowdown of the global economy will lead to a decline in demand and metal consumption, meaning more stock will be put on warrant on the LME. That in turn should press the cash price lower than forward prices leading to wide contangos on the LME aluminium spread, meaning even higher profits for participants who hold the metal at warehouses, under the financing deals.

Andy Home, Senior Metals Columnist at Thomson Reuters, shared his insights on US metals and minerals policy at SMM London Metals Seminar, also in conjunction with LME Week. He reminded that tariffs on aluminium imports had a great impact on US domestic aluminium industry, reflected in soaring US Midwest premium, after the US imposed duties on imports of aluminium. Aside from prices, the tariffs have also taken a toll on the supply chain, including primary aluminium and semis. 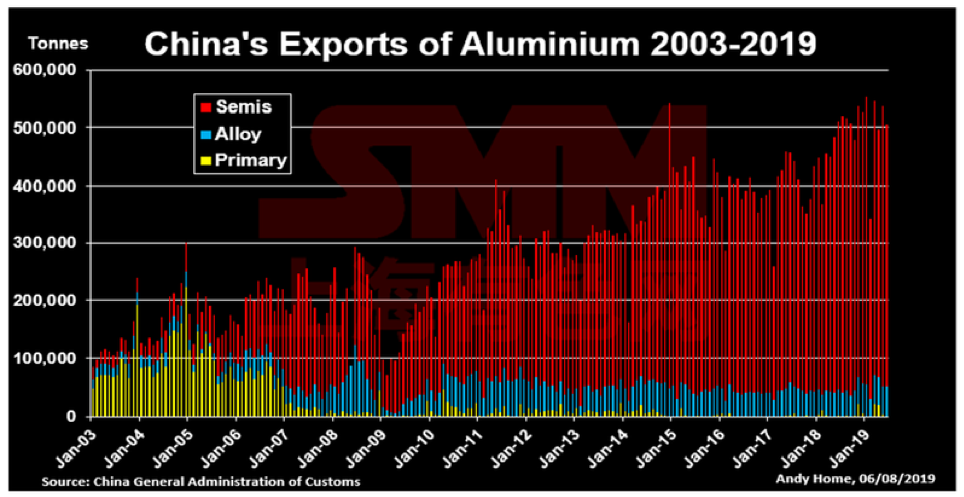 As the LME Week closed, the aluminium price increased sharply, reaching US$ 1813/tonne by November 5th, and for the first time trading above US$ 1800/tonne limit since July. Though initial comments connected the rise with better than expected manufacturing data in China, the main reason behind the growth was information that Vietnamese customs discovered and seized about US$4.3 billion worth, some 1.8 million tonnes  of China originated aluminium falsely labelled “Made in Vietnam”, before being shipped mostly to the US, the Dan Tri news website reported, citing Nguyen Van Can, head of the General Department of Vietnam Customs.

Vietnam is the top export destination for China’s aluminium extrusions, according to China’s customs data, in purpose to avoid US and Chinese tariffs amid the ongoing trade war.

This analyst expects that this may be the turning point for decreasing China’s aluminium exports in the following months, which should be supportive for the aluminium price.