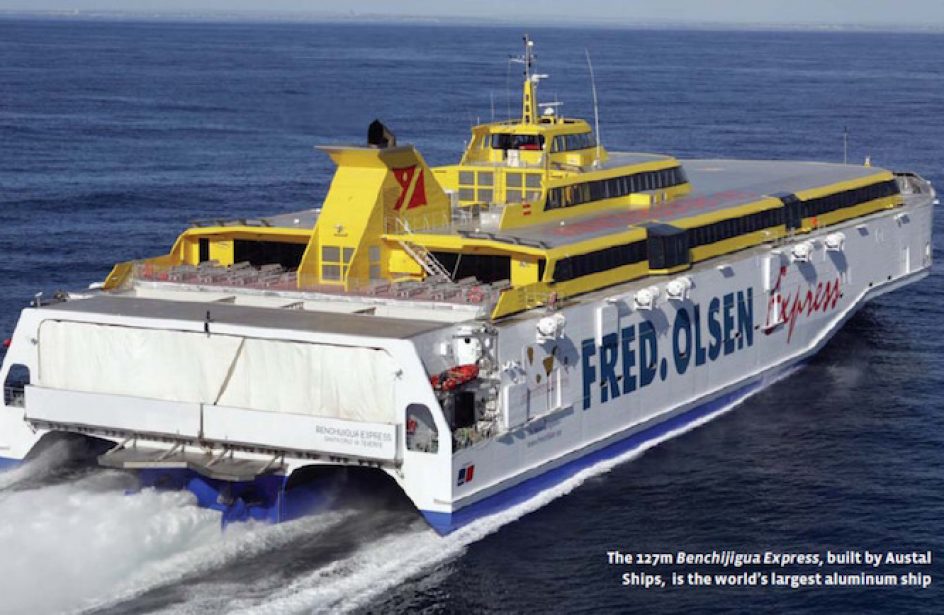 Trends in shipbuilding have become similar to those in the automobile industry in recent years and the growing demand for automobiles, heavy duty vehicles, aircrafts, trains and ships is also set to significantly spur demand for aluminium flat rolled and extruded products. In fact, the use of aviation, marine and rail transportation will likely increase to such an extent that their combined energy demand is expected to equal about 85 % of the amount used by light-duty vehicles by 2040, up from about 50 % in 2014, according to Exxon Mobile.

The necessity for lowering the weight of different ships, in order to increase the payload and reduce fuel consumption, has turned shipbuilders towards aluminium alloys due to their potential to reduce the weight of ship structures by up to 50%, compared to those made from low carbon steels. Additionally, the roughly five times higher costs of Al–alloys, with respect to the costs of low-carbon steel, become acceptable if taking into account the total cost increase on one hand, and the payload increase as well as the excellent corrosion resistance, on the other (lower maintenance costs). Al-alloys also directly reduce the loss of cargo dead weight due to the lighter structure of a ship while at the same time improving the ship’s stability. Moreover, by reducing the vessel’s weight, the use of aluminium alloys allows for higher speeds, greater payloads, lower fuel consumption, longer distances and excellent manoeuvrability.

The position of steel as the most widely used material in the shipbuilding industry originates from its superior mechanical properties and low manufacturing costs. However, the non-heat-treatable Al-Mg alloys have been considered favourable in respect to the costs and all the required properties for successful vessel service. The most popular aluminium alloys for use in corrosive environments are non-heat treatable 5000, and heat-treatable 6000 type alloys, because of well-balanced strength parameters, weldabilty and formability. The 6000 alloys are stronger but two to three times less corrosion resistant than the 5000 series. The little to no need for maintenance of marine structure surfaces (less frequent painting or other coating refreshments) is an important cost saving factor during the serving of the ship – lifeline of any aluminium component.

The traditional and the most often used Al-alloys in shipbuilding are 5083 type Al- Mg alloy for plates, and 6082 type Al-Mg-Si alloy for extrusions. These alloys were found to be reliable in marine service as well as during manufacturing. Aluminium alloys meet or exceed the minimum yield strength requirements for normal strength steels (mild steels), and could even compete with high strength steels. They also have superior corrosion resistance (steel corroded at a rate of 120 micrometer per year, while in a similar study, aluminium corroded at a rate of only 1 micrometer per year).

The material costs of building a ship are only 1-2% of the total cost of the ship. Major costs are associated with the manufacturing of the ship. Today’s advancements in manufacturing with aluminium alloys are offering significant cost saving factors, and making aluminium ships in parity with steel ships could be the future. Shipbuilders such as Australian company Austal are implementing additional improvements in the production of aluminium ships – involving router cutting, work kitting, complex extrusions and welding – that will significantly improve productivity and reduce costs in the future, since labour is the highest cost when building a ship using aluminium alloys.

Austal is global leader in aluminium vessel construction and structural design. Aside from taking advantage of the high strength of aluminium alloys for shipbuilding, they also use composite materials (fibreglass and carbon fibre) for the purpose of lightening vessels. In general, all Australian shipyards have built a reputation for quality and speed performance when it comes to aluminium intensive vessels.

Makoto Yakata, general manager at UACJ’s sales planning department, one of global leading producers of aluminium rolled products, recently told Bloomberg that demand for aluminium products by the LNG shipbuilders had risen since the 2011 nuclear power plant disaster in Japan. The company’s forecast for demand from LNG carriers has risen to 44,000 tonnes in 2015 with another increase to 56,000 tonnes in the fiscal year 2016. One tanker uses 4,000 tonnes of aluminium sheets said Yakata, adding that it will make products for 30 LNG carriers up until March 2017.

Aluminium is used not only in construction of tankers and big ships but also in yachts, motor boats, cutters as well as underwater craft. Most of sporting boats are built from aluminium, from keel to mast, which gives them a speed advantage, while high capacity vessels are built from steel. Nevertheless, the superstructure and other auxiliary equipment is made from aluminium to save weight and increase the cargo carrying capacity.

There is currently no available reliable data concerning how much aluminium alloys are used by shipbuilders in more than 430 shipyards around the world, but an approximate (my personal) estimate it is about 1 -1.2 million tonnes per year, most of which belongs to rolled aluminium products (75-80%).

Aluminium ships have a clear advantage over steel ships with regards to total ownership costs. This is due to the fact that aluminium ships are lighter and use less fuel than steel ships. Aluminium ships also do not incur lifecycle maintenance costs associated with painting, and because they are generally smaller, they require less manning. And when an aluminium vessel reaches the end of its life span, it continues to provide significant benefits as a result of its high recycling value.

With all the existing technologies and methods available for aluminium shipbuilding, aluminium has the potential to replace steel in the future as the main ship construction material. The use of aluminium alloys will especially grow in smaller ships and yachts while the long ships and tankers (over 130 m) will continue to be dominated by steel. All in all, aluminium’s future in shipbuilding is bright.