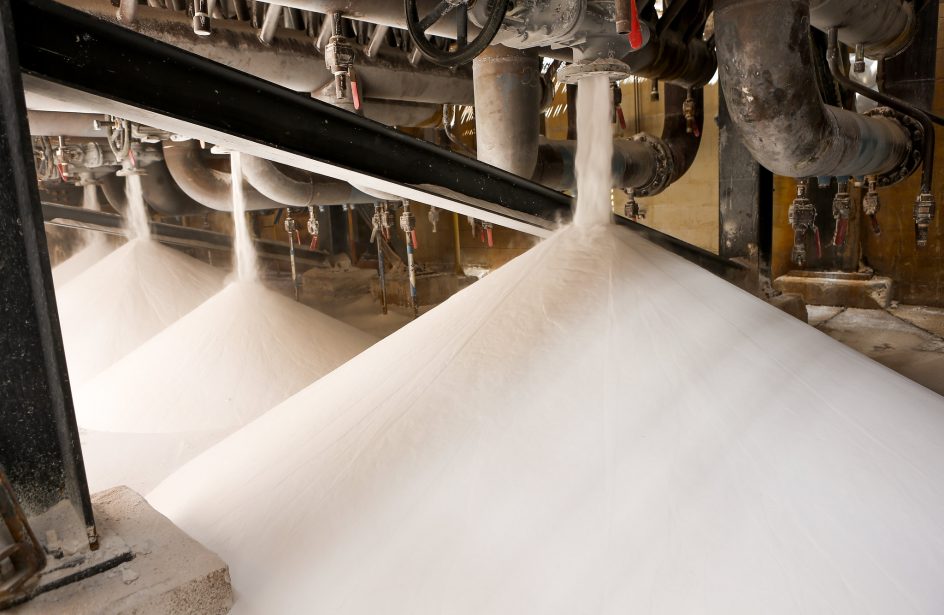 2018 was a turbulent year for both the alumina market and the price, signified by the fact that spot price indexes remained above historic averages for most of the year. 2019, however, has brought calm and stability. The alumina price (both spot and fob) has been trading in the range of US$ 390/t  and US$ 410/t most of the time since early November 2018.

Alumina market volatility was primary a result of production and supply disruptions, yet they brought extra profits to alumina producers and traders. At the same time, they led to losses to primary aluminium producers without their own alumina production, or without a contract-based price as a percentage of the LME aluminium price. Instead, these firms need to buy alumina at market prices based on one of the alumina indexes.

The LME started to publish its own alumina contract prices on March 11, called LME Alumina, which is based equally on the CRU and Fastmarkets MB indexes. For the nearest delivery term of one month, the index currently stands at US$ 409/t.

A cargo of 30,000 tonnes of Chinese-origin alumina was sold at 2,810 yuan (US$ 417.10) per tonne fob at Yantai port to Glencore in late March, a source familiar with the matter told Fastmarkets on Friday, March 29.

Rio Tinto gets pulled down by legacy contracts

Still, not all alumina producers benefited or made profits on high alumina prices. Those who sold alumina under long term contracts prior to 2018, either on a fixed rate or pegged to the LME aluminium price, definitely lost money.

An example is Rio Tinto. In its recent earning’s report, Rio Tinto stated it still maintains legacy sales contracts pegged to the LME price until 2030, which have had a negative impact on the company’s financial results for 2018: “We are exposed to approximately 2.2 million tonnes of legacy alumina sales contracts which have a fixed linkage to the LME price. These contracts date back to 2005 or earlier, and the majority expire between 2023 and 2030 (~ 30% post 2023).”

“The negative effect on EBITDA [earnings before interest, taxes, depreciation and amortization] of these legacy contracts, following significant escalation in the alumina index due to industry supply disruptions, was US$ 460 million in 2018 (based on average prices of US$ 2,110/t for LME aluminium and US$ 474/t for alumina over the year).This was US$ 300 million higher than in 2017,” it added. Rio Tinto estimates a negative EBITDA impact of US$100M for every 10% increase in the alumina index price, and a negative impact of US$ 60M for a 10% decrease in the aluminium LME price. The opposite impact applies if index pricing moves in the other direction.

It is not known how much Greek company Mytilineos Group, the owner of Aluminium of Greece, has lost in 2018 on its long-term supply alumina contract with Glencore but probably less than Rio Tinto. Mytilineos signed a 10-year contract with Glencore in 2008 to sell more than 5 million tonnes of alumina for US$ 2 billion, meaning the price of a tonne of alumina sold is below US$ 400/t.

According to the information from the company the contract was extended (before it expired) to 2025, with no further details.

However, as the Platts alumina index graph below shows, the Mytilineos-Glencore contract was mostly profitable for Mytilineos since its inception in 2011. Yet this seems to have changed in 2018. That year, sales of alumina were below market prices, in April and September 2018 even significantly so. 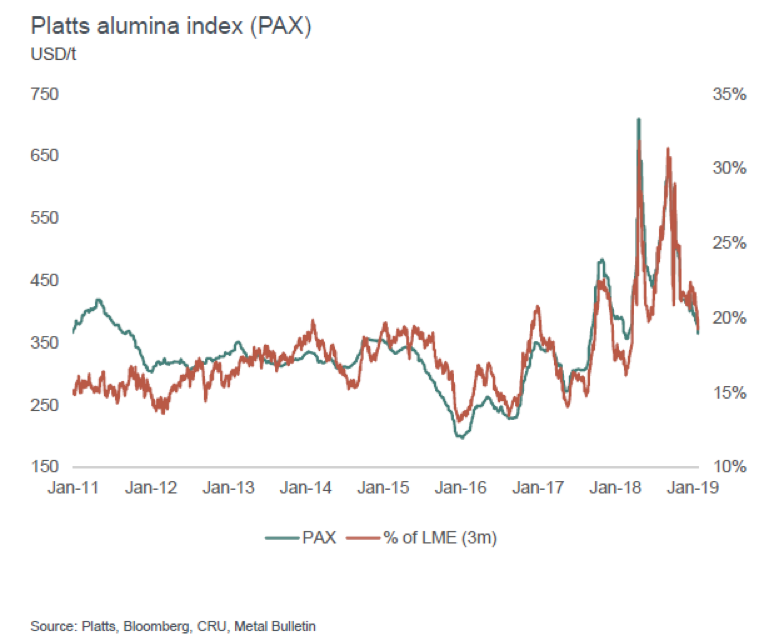 Federal Court in Brazil to decide on Alunorte

On April 12, Brazil’s Federal Court held a conciliatory hearing between the Public Prosecutor’s Office and Alunorte to discuss the production embargos for Norsk Hydro’s Alunorte alumina refinery. At the hearing, the Prosecutor’s Office, Alunorte and independent engineering consultancy Rambøll provided the court with a joint petition to lift the production embargos, emphasizing Alunorte’s ability to resume safe operations.

The world’s largest alumina refinery, with an annual production capacity of 6.4 million tonnes, has been running at half capacity since March 2018 due to environmental concerns. Heavy rains in February 2018 caused its retainment ponds to overflow, possibly contaminating groundwater water supplies in the area.

At a previous hearing, the Federal Court reviewed the third-party assessments produced in January by the environmental agency of the federal state of Para and a Brazilian university, both of which had concluded that the company could restart and even increase operations safely.

The Alunorte case is expected to come to a positive resolution and the plant returning to full capacity production. This should reduce alumina prices. The Federal Court is expected to make its final decision by end of the month.

There is an interesting twist to the Alunorte story: the plant’s reduction in alumina production has been the cause for abundant caustic soda supply in the Americas. Alunorte is usually the largest buyer of US caustic soda, consuming over 600,000 dry metric tonnes a year when running at full capacity. Domestic prices for caustic soda in Brazil are US$ 550-680/dmt FOB (free on board) USG (US Gulf), depending on delivery size, according to ICIS. Imports hover at around US$ 400-540/dmt CFR (cost and freight) Brazil.

Hindalco Industries, an Aditya Birla Group company, has suspended alumina production at its Muri, Jharkhand plant in early April due to spillage of bauxite residue (also known as red mud) in areas around the storage facility. The alumina refinery in Muri has a capacity of 450,000 tonnes and was the first alumina refinery to get commissioned in 1948 by the erstwhile Indian Aluminium Company (INDAL).

Besides Alunorte’s restart and full capacity production in the second half of the year, various alumina greenfield and brownfield projects are expected to inject significant alumina supply into the market as well, resulting in a market surplus. The biggest contributor will be Emirates Global Aluminium’s Al Taweelah refinery. Construction cost US$ 3.3 and production began in April this year. At full capacity, the facility can produce 2 million tonnes per year, but output for 2019 is expected to be around 0.7 million tonnes.

Other projects expected to restart or increase production in 2019 include Alpart Alumina refinery in Jamaica, India Vedanta’s Lanjigarh refinery and Friguia refinery in Guinea, among others. Global alumina production (excluding China) is expected to increase by nearly 4 million tonnes this year, compared to 2018.

At a time when Chinese aluminium exports are at a record high and aluminium prices are weak, lower alumina prices would constitute a big relief for smelters as well as production throughout the year. 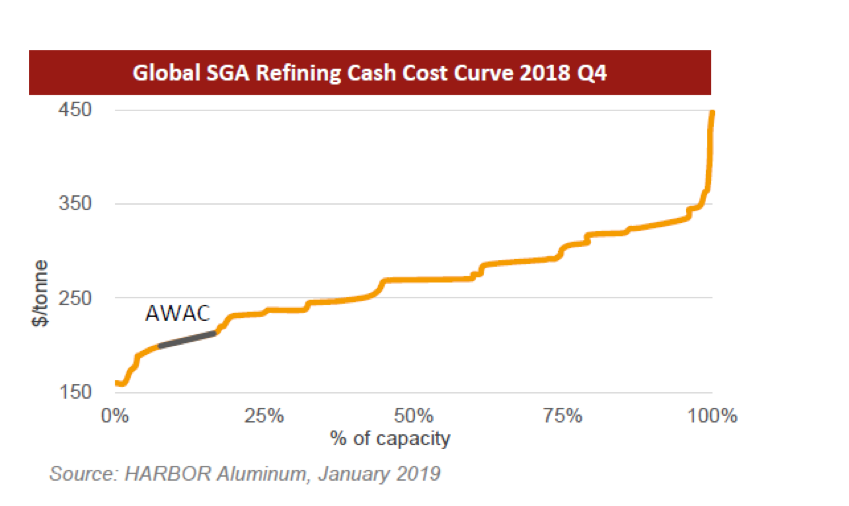 However, alumina prices are not expected to fall below the average refining production costs of roughly US$ 300/t.