In September last year Alcoa Inc, a global leading aluminium producer by revenue, announced that it would split into two separate companies. One company will retain the Alcoa name and primary aluminium business while the other, yet to be named, will house Alcoa’s value-added business. Alcoa’s CEO ed hopes that the move will unlock shareholder value and will result in a generally positive outcome for the company as a whole. 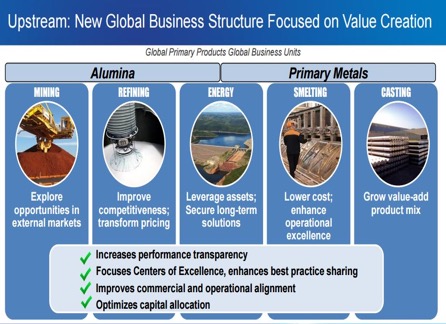 There is no doubt that the decision was long and well prepared and is the result of deep and comprehensive analyses. Put simply, people who lead Alcoa do not want the value-added business to depend on commodity cycles any more. The metal that has the highest demand growth among all base metals is experiencing the lowest price since 2004. Finally, this is reflected on lower company profits, capacity closures, and finally, the split (break up) of the 128 year old company that has been one of the leaders and symbols of quality in the aluminium world.

One of reasons that people at Alcoa expressed their concern about breaking up the company before was that they saw advantages in having a vertically integrated operation. Some critics of the split now believe that the synergy within the organization will disappear, offsetting some of its expected benefits. However, CEO Kleinfeld expects the value-added products will more than compensate for any synergy issues that the existing company may benefit from. The two companies will be simpler structures, allowing their respective managements to better focus on delivering value in the separate businesses.

The upstream business will comprise bauxite mining, alumina refining, primary aluminium smelting and casting capability, while the value-added segment will include engineered products as well as global rolled products, incorporating new Micromill technology products and global packaging. Innovations like Micromill and 3-D printing allow more efficient production for future needs of automotive and aerospace industries in expectation of significantly increased demand, before all from the automotive industry. The greater the diversification and the larger variety of value added and engineering products, means the healthier the value-add business will be after the split. 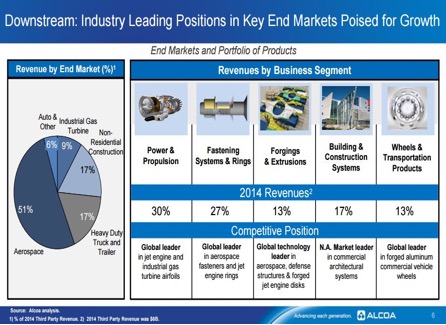 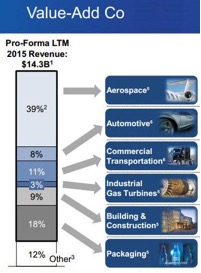 Both LME aluminium price and Alcoa’s stocks have plummeted throughout the last year, which additionally accelerated the decision to for the split, which meant to be realised by end of 2016. The terms of split are still to be disclosed.

Alcoa has been struggling to reduce costs in recent years and has had to close higher cost capacity for primary aluminium smelting (by a third since 2007). But despite all its efforts, it made a net loss of US$ 121 million last year largely due to the low aluminium price, even though there is strong demand for its specialty and high value-added products, from the aerospace and automotive industries.

On the other side, Alcoa’s recent acquisitions of UK based Firth Rixson, producer of jet engine parts, for US$ 2.9 billion, as well as main players in the titanium business such as Tital and RTI International, have made its value-add capacity much larger, positioning the future new company to become a leading supplier for the aerospace and automotive industries. These acquisitions already contributed to new supply contracts with major aircraft producers. The Lockheed Martin deal, for instance, has been considered to be directly related to Alcoa’s acquisition of RTI. Alcoa also recently signed a US$ 2.5 billion supply deal with Boeing, a US$ 1 billion with Airbus and US$ 1.5 billion with General Electric to supply parts for plane engines. This leads to a conclusion that Alcoa is well prepared for the split. 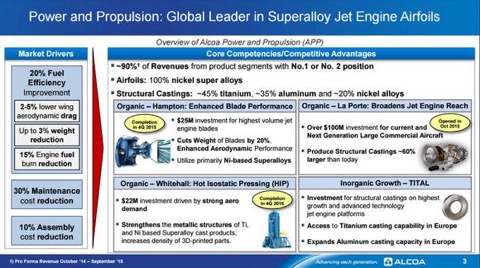 It is expected that current Alcoa shareholders will automatically get shares in the new company, after the deal gets an approval at the shareholders’ assembly first. Presumably, current shareholders will receive a share in the spin off equal to their ownership in Alcoa as a percentage of the total business.

The BHP Billiton spin-off last year saw shareholders receive one South32 share for every BHP Billiton share they held. Still, it was a different case (a split within a mining company) and cannot quite be compared with Alcoa.

Following the news of Alcoa’s split, rumors began to circulate that Norsk Hydro will follow Alcoa, after the results of the final outcome. However, despite strong rolled and extrusion segments for the automotive industry, the company is still well behind Alcoa in the aerospace segment. It is informative that Mr. Kleinfeld expects the split of Alcoa to enable investors and shareholders to choose: those who prefer innovative new products and technology and the others who will focus toward the cyclical upstream business. Kleinfeld expects everyone to benefit from having two choices and an increase in long-term investments.

There is no doubt that Alcoa’s shares are undervalued in this moment and that the split would create huge potential for growth compared to the current levels. The author believes it is currently the best moment to buy shares. Aside from growth, Alcoa shareholders would get shares in both new companies. While it is expected that the value-added segment will be more attractive for future investors, the downstream segment may become surprisingly positive as well with recovery of aluminium prices. Moreover, the strength or weakness in each of them would be less reflected on the other one. The conclusion is that Alcoa’s split is a reasonable, strategic move that will enable a better future for both companies and more profits for their shareholders. 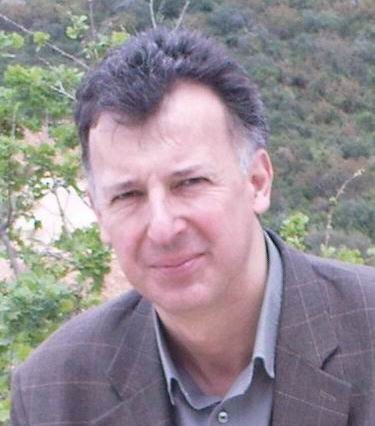