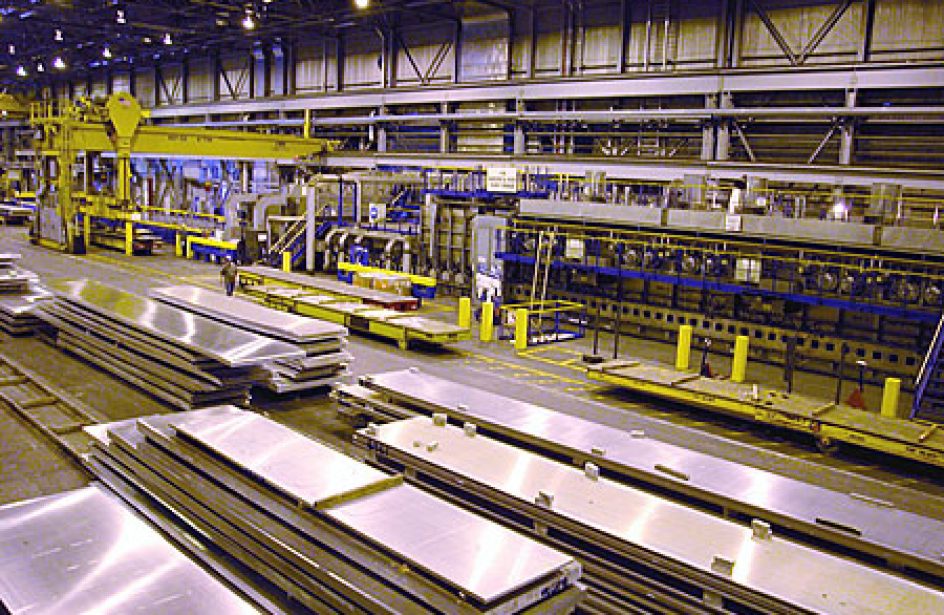 This is one of several horizontal heat-treat furnaces at Alcoa’s Davenport Works. It is used for heat treating aluminum plate. Source: Alcoa

Alcoa Davenport Works are the proud new owners of a massive new machine that it says will improve the plant’s aluminium production.

“These two big parts today are actually coming from South Korea so they came across the Pacific, went through the [Panama Canal], came up to New Orleans on an ocean-going ship, then they off loaded it onto a barge which you see here today,” said Alcoa spokesman John Riches.

The parts are to be used to assemble a massive plate stretcher. First announced in 2014 and part of a US$190 investment in the plant by Alcoa, the plate stretcher will allow the plant to produce larger high-strength monolithic wing ribs than any other firm in the aerospace industry.

The plate stretcher will also allow the plant to make fuselage frames and aircraft bulkheads. Other applications include plastics molds and manufacturing chambers for consumer electronics and the semiconductor industry.

The entire project is being installed by Walbridge Industrial Process, and is comprised of a 350-short-ton pull head, 300-short-ton tail head, two 125-short-ton compression beams, a 75-short-ton transfer cart, and two hydraulic gearboxes. The whole machine weighs around 1,500 short tons when fully assembled.

“They want to be able to machine parts out of bigger pieces of plate,” said Riches

The plant will now be able to produce one-foot thick plates of aluminum, which, according to Alcoa, is thicker than anyone else on Earth. Without the new machine, the plant’s maximum is seven inches.

“It’s coming off the ship today; It’s still going to take a number of months to get installed and put together,” said Riches.

According to Alcoa, the final piece will arrive in September, and the first production of pieces for sale to customers is expected to be at some point next year.