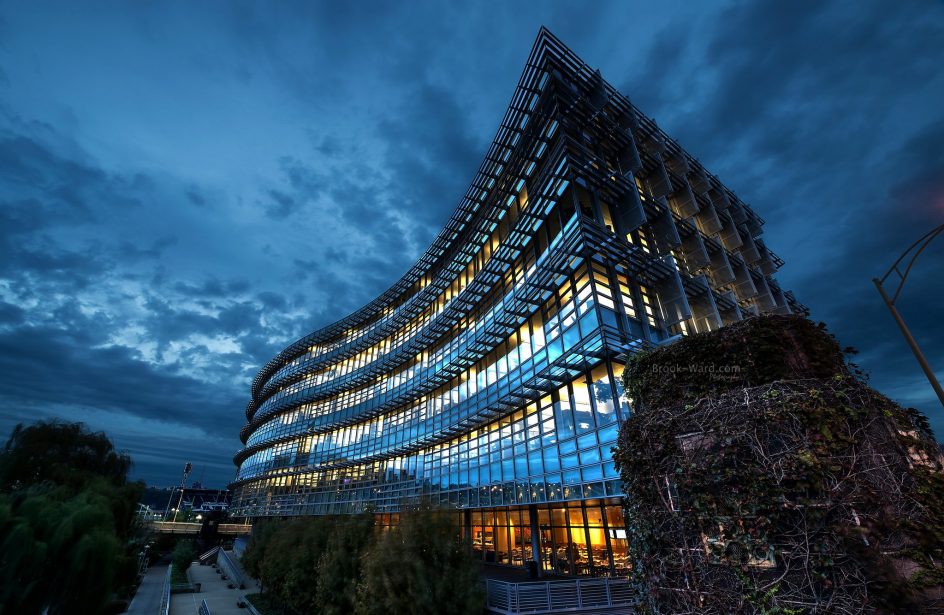 Since Alcoa (NYSE: AA) launched as an independent company – (after spinning off its downstream segment in November 2016, now rebranded as Arconic,), the company has continued to fight tough market conditions to secure growth. The split was not a surprise to market watchers, as it came after the average LME cash price for 2016 hit the lowest level since 2003 (US$ 1605/tonne). But 2019 has registered some success for Alcoa, in the way the company has rationalised and increased production, while further lowering costs.

Alcoa posted a net loss of $402 million (US$ 2.17/share), which includes a $319 million one-off cost to divest from its 25.1% minority interest in the Ma’aden Rolling Company (MRC) in Saudi Arabia. The remaining US$ 81 million were earmarked for other special items (including a tax provision of US$ 22 million, US$ 8 million for the USW master agreement negotiation and other Becancour lockout related costs). With these move, Alcoa has been released from all future MRC obligations, including Alcoa’s support for MRC debt, and its share in any future MRC cash contributions. Excluding the impact and costs of special items, Q2 2019 adjusted net loss amounts to US$ 2 million, or $0.01 per share.

Alcoa continues to hold a a 25.1% stake in the joint ventures with Ma’aden on bauxite mining, alumina refining and aluminum smelting. Alcoa reached two new competitive labour agreements at smelters in Québec, where it agreed to six-year contracts at the Baie Comeau (May 31) and Bécancour (July 2) smelters in Canada. Ending an 18-month labour dispute, the Bécancour restart began on July 26. The full restart will be completed in the second quarter of 2020.

Finally, Alcoa reached a conditional agreement on July 5 to divest from the Avilés and La Coruña aluminium plants in Spain. Alcoa expects to record restructuring-related charges in the third quarter of 2019, estimated to range between US$ 100 million and US$ 140 million (pre- and after-tax), or $0.54 to $0.75 per share, depending on whether an acquisition or a collective dismissal occurs.

In the second quarter, Alcoa reported adjusted EBITDA, excluding special items, of US$455 million, down slightly from the prior quarter, primarily due to lower pricing for both alumina and aluminium that was partially offset by higher energy sales and lower costs for raw materials. The second quarter revenue was US$ 2.71 billion, which is flat sequentially from the previous quarter. The cash balance at the end of June stood at US$ 834 million and total debt at US$ 1.8 billion, while net debt was US$ 1.0 billion, as of June 30, 2019.

In the Bauxite segment Alcoa, expects adjusted EBITDA improvement between US$ 5 and 10 million in Q3 2019, on higher production and lower major maintenance costs, compared to Q2 2019. The same is expected in the alumina segment, where lower caustic soda costs are expected to provide US$ 30-35 million sequential benefit Q/Q.

William Oplinger, Alcoa’s executive vice president and chief financial officer, said at a conference in May, that the company expects approximate benefits of US$ 100 million a year due to Section 232 tariffs on aluminium imports. This mainly comes from significantly higher Midwest premiums, which have created a “pricing umbrella” for U.S. primary aluminium producers. However, the recent removal of imports tariffs for aluminium produced in Canada resulted in falling Midwest premiums, which will likely send Alcoa’s benefits lower.

Recently Alcoa announced that the Aluminium Stewardship Initiative (ASI) has certified three Alcoa-operated locations, one in each of the Company’s three business units. The ASI certifications are valid for three years and include the Juruti bauxite mine in Brazil, the Alumar alumina refinery near São Luís, Brazil, and the aluminum smelter in San Ciprián, Spain.

It is interesting to make a quick comparison between the old Alcoa (which includes Arconic) and today’s streamlined Alcoa. As a reminder, Arconic includes the Aerospace, Automotive, Can-stock and Engineering divisions (building and construction and industrial gas turbines).

Though no precise comparison can be established due to different accounting methods, looking at the two companies’ revenues from sales and EBITDA can provide a good image of their respective sizes.

If we take as a reference Q2 2015, and compare to Q2 2019, considering similar market conditions and LME aluminium prices, and if we take into account that: 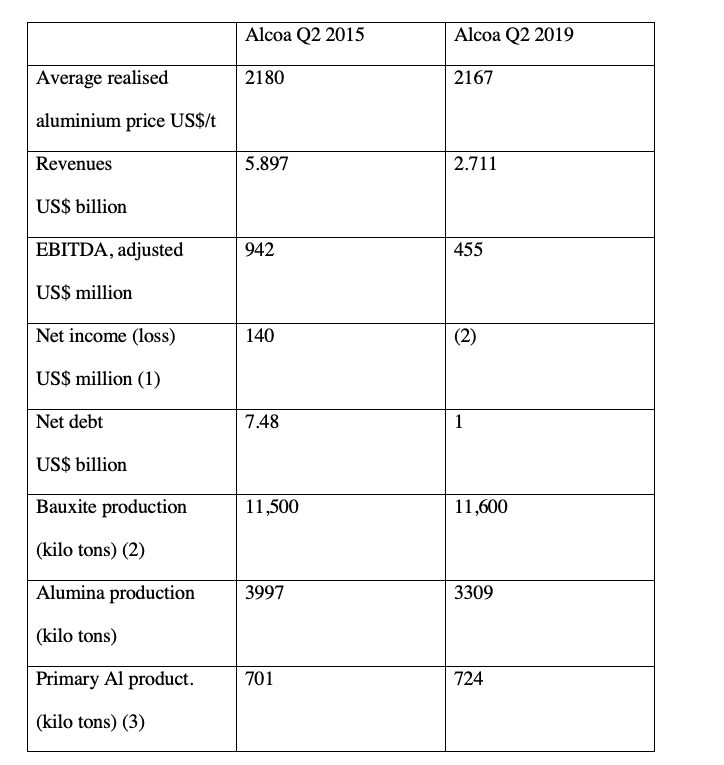 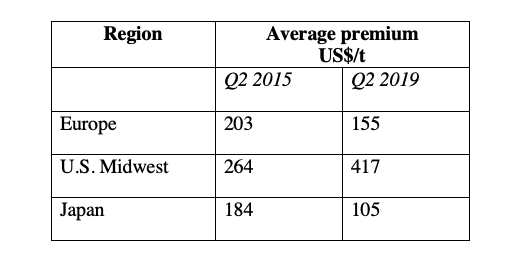