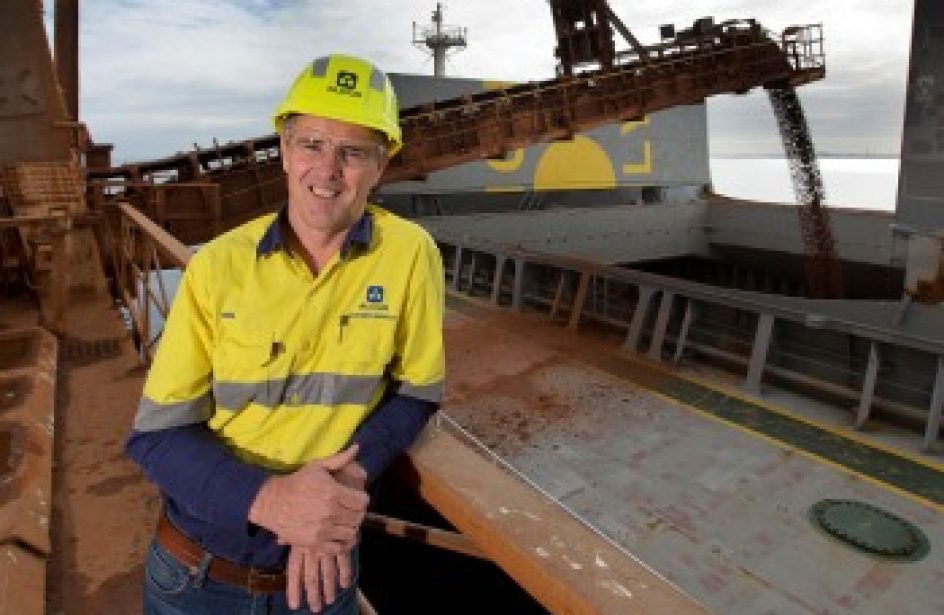 Mal Briggs, Alcoa's Vice President Mining Operations, looks on as the first bauxite is loaded for export to China. Source: Alcoa of Australia

Alcoa of Australia has loaded the first shipment of bauxite from its operations in Western Australia. Hailed as a milestone by the company, the shipment is headed to an alumina refinery in the People’s Republic of China.

The event, held at the Perth suburb of Kwinana, consisted of 47,000 metric tons from Alcoa of Australia’s mines at Darling Range, which is located across Perth from the port. Alcoa of Australia, is a joint venture owned 60 percent by Alcoa Inc. and 40 percent by Melbourne’s Alumina Limited.

The shipment is the first in an export trial approved by the state government. Alcoa is testing the viability of exporting bauxite. Up to now the company has been using the bauxite mined to fuel domestic refineries in Kwinana, Wagerup and Pinjarra. As it stands now, the firm has a surplus of bauxite. Alcoa is therefore looking to cash in on the demand for third-party bauxite supply, much of which is from China. The Middle Kingdom’s demand could be as much as 70 million metric tons per annum.

According to Alcoa Mining president Garret Dixon, the shipment supports the firm’s growth strategy and will complement their overall mining strategies.

“Alcoa operates the world’s largest integrated bauxite and refining system here in WA,” said Dixon. “Over 53 years we have established sustainable mining practices to feed our three alumina refineries at Kwinana, Pinjarra and Wagerup. Bauxite exports provide the opportunity to strengthen our business by creating an additional revenue stream. They will help optimise the value of our Darling Range mineral lease for the company and the State without impacting the life of our WA refineries.”

In April, Alcoa World Alumina and Chemicals (AWAC), a joint venture between Alcoa and Alumina Limited of Australia, announced that it had signed several bauxite supply contracts valued in the aggregate at US$350 million over the coming two years.