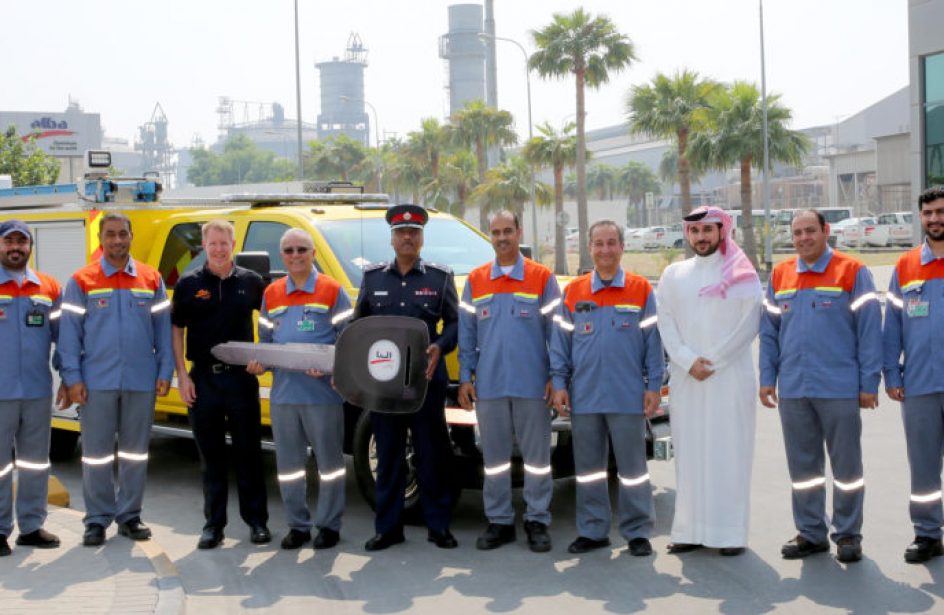 Aluminium Bahrain B.S.C. announced a new addition to its safety vehicles today as it added to the fleet a custom-made fire truck that features state-of-the-art fire-fighting equipment.

The vehicle, which was produced by a United States company specifically for Alba, complies with international fire safety standards and Bahrain’s requirement that it be able to service any of Alba’s operational plants. The design and building of the vehicle was done in conjunction with Alba’s Safety, Health and Environment (SHE) department and the company’s fire department.

In comments made at the vehicle’s commissioning on October 21, Alba’s Acting CEO Ali Al Baqali said the vehicle would play an important role in plant safety.

“While policies and procedures are key to maintaining Safety on the job, the right Safety equipment enables us to keep our people and plant safe. An ultramodern Fire Truck is not just the need-of-the-hour but a long-term investment to meet the current and future Safety demands of a production facility as big as Alba.”

“As one of the leaders in Public Safety, Vocational Health, Safety and Fire Prevention, Alba has identified the potential direct and indirect risks to employees’ health in its plant and taken the necessary steps to protect its facilities and environment through prevention and readiness for any emergencies,” explained Deputy Director of Operation Department at Civil Defence, Colonel Mohammed Ahmed Al Ghadeer.

“The new Fire Truck will certainly enhance the Company’s preparedness and effective response to different incidents, especially electric fires, as it is equipped to remotely handle electric fire incidents, which would help control the fire at early stages.”