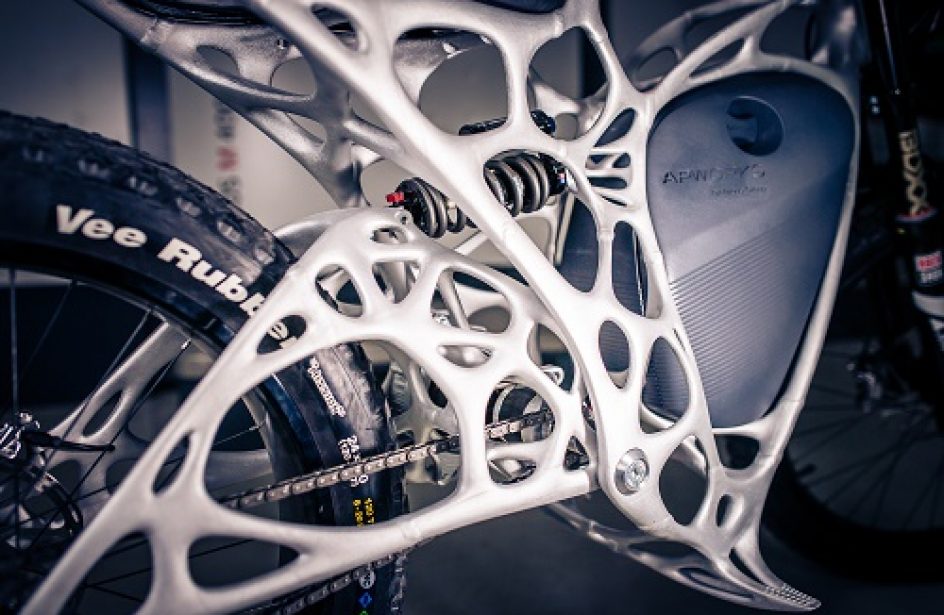 Named the Light Rider, APWorks’ creation weighs 35 kg (77 lbs) in total, and is built on a 6 kg (13 lb) frame. It has a 6 kW (8 hp) electric motor that can accelerate the unit from zero to 80 kph (50 mph) in mere seconds. According to the firm, this motorcycle is 30% lighter than comparable e-motorcycles.

APWorks designed the Light Rider using an algorithm that helped keep the vehicle’s weight down while remaining strong enough to handle forces that may be encountered in daily driving use. The motorcycle’s design ended up resembling an exoskeleton, which was a deliberate choice by the designers, who programmed the algorithm to utilize bionic structures and natural growth processes.

“The complex and branched hollow structure couldn’t have been produced using conventional production technologies such as milling or welding,” said Joachim Zettler, CEO of APWorks. “Advances in additive layer manufacturing have allowed us to realize the bionic design we envisioned for the motorcycle without having to make any major changes. With these technologies, the limitations facing conventional manufacturing disappear,” he added.

APWorks’ 3D-printing method involves using a system that lays down thousands of layers of aluminium, each layer being only 60 microns thick. The firm also made the frame hollow, which allows for integrated cables, pipes, and screw-on points, and led to the 30% weight savings described above.

“We further harnessed the benefits of metallic 3D printing by using our own proprietary material, Scalmalloy, for the construction of the frame,” said Zettler.

According to APWorks, a limited run of fifty motorcycles will be offered for sale in the near future. Interested parties are encouraged to inquire at their website for more details and to pre-order a unit.