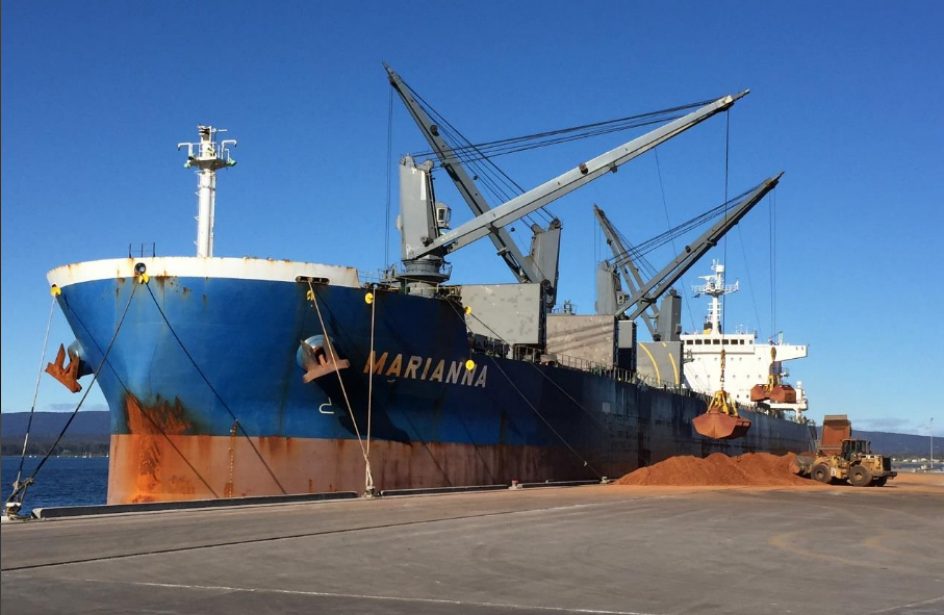 The M/V Marianna being loaded with 35,000 tonnes of bauxite at Bell Bay export port. Source: ABx

Australian Bauxite Limited (ABx) updated its shareholders regarding current operations yesterday, identifying major shipments currently in the works as well as improvements to port and mine facilities, transportation operations, and fertilizer sales to date.

ABx began loading its next two shipments of bauxite ore last Saturday at Bell Bay Port in Tasmania, which it says is several weeks prior to the negotiated deadline. The firm did not identify the buyer or destination, but did indicate that the shipment is scheduled to leave today with a cargo of 30,000 metric tons of blended mixed-grade bauxite and 5,000 metric tons of cement-grade bauxite. ABx says a multiple-cargo shipment like this showcases the firm’s ability to supply customers with custom-tailored bauxite mixes.

ABx identified Stornoway Projects Pty Ltd as conducting specialty operations at the Bald Hill Mine site, including establishing a procedure whereby custom bauxite blends are made based upon customer specifications. QUBE Logistics served as stevedore for the shipment as well as acting in cooperation with TasPorts in managing stockpiling while the shipment awaited loading. ABx pointed out that the consistent handling of the bauxite ore assured proper quality control, which they say was confirmed by inspections by two of the customers’ agents.

The firm says that the sale in question is a precursor to more such sales in the future, adding that sales volumes are likely to increase as it lands more offshore clients, assuming that currency exchange rates remain favorable.

ABx also advised that the company’s fertilizer-grade bauxite sales have seen an increase as the Southern Hemisphere passes into the summer months. Though not the company’s primary business, ABx says it is a “modest but valuable” enterprise that supplies domestic industry.