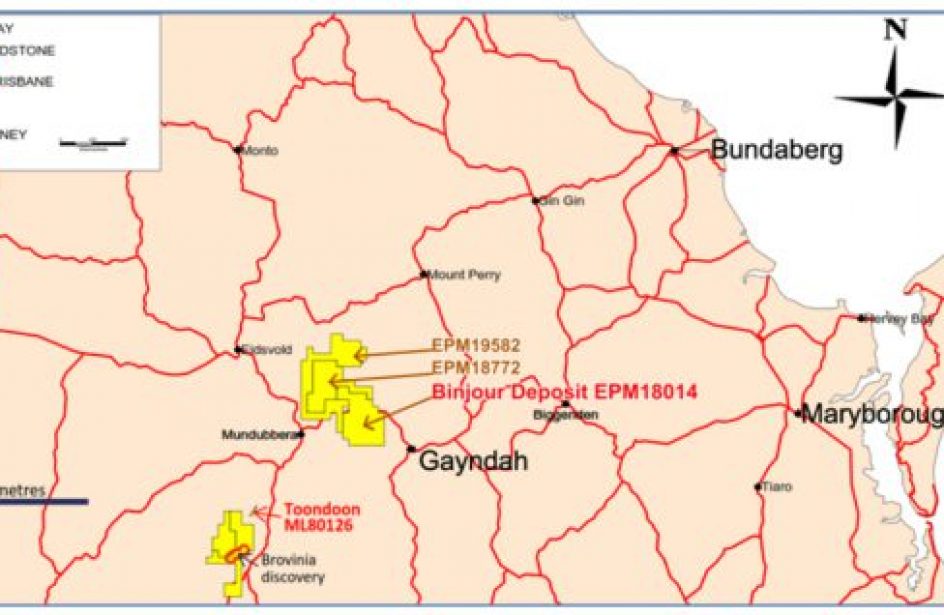 Locations of ABx’s Binjour Project and raods infrastructure. Map shows Binjour deposit, granted ML 80126 at Toondoon and the bauxite discovery at Brovinia. The distance from Binjour to Bundaberg Port is 115kms. Source: ABx

Australian Bauxite Limited (ABx) announced yesterday that it has teamed up with marketing partner Rawmin to request a grant from the Australian government for funds to develop its Binjour Bauxite Project.

The firms submitted a grant proposal to Canberra for the Regional Jobs and Investment Package for the Wide Bay Burnett region in Queensland. The grant, which could net the firm up to A$20 million in funding, is a program intended for diversifying the local economy, stimulating economic growth, and establishing sustainable employment for the area. The grant will cover half of the eligible project costs, with grantees funding the remaining costs.

ABx’s grant identified three milestones, with commencement of bulk sampling to occur in October of this year.

“The synergies with Rawmin’s own mines in India are substantial because Binjour can supply bauxite during the QLD dry season which is the wet season in India when Indian ports are closed.

“Working with Rawmin with regards sales strategy and finance for the project may deliver the Binjour Bauxite Project earlier than expected.”

“Assistance from the Federal Government’s Regional Jobs and Investment Package scheme would allow us to get started promptly. The assistance of governments and Rawmin are greatly appreciated,” concluded Levy.