Base metal prices surged in February after the lowest start of the year since the global financial crisis in 2009, as a way of optimism prevailed among investors on stronger than expected U.S. economic data. Both aluminium and copper prices reached the highest levels for the previous three months, with aluminium LME cash price for the first time at US$ 1600/ tonne since mid October last year. The U.S. consumer spending rose solidly in January while fourth-quarter economic growth was revised up to 1 %, higher than expected.

Oil prices also rose, supporting base metals complex, on a round of short-covering and some light buying on account of the fact that the EIA numbers were not as bad as expected in terms of additional stock builds, triggering the rally in the US stock market. 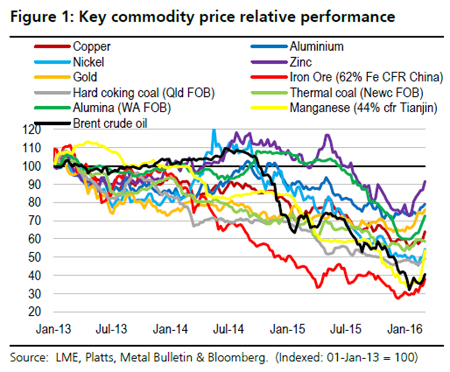 The extent of weakness of the metals market is best described by the following statistics: the total value of completed metals sector deals in the past year fell to the lowest level ever recorded in PwC’s annual series of reports. Deal value dropped 32% year on year, from US$16.8bn in 2014 to US$11.4bn in 2015. This is US$3.7bn below the low of 2009, immediately post-credit crunch, and US$4.7bn below the level in 2003, the first year of this metals deal data series. PwC’s modelling of deal trends against wider macroeconomic influences suggests a modest rise in announced deal volumes in 2016, with the potential for a bigger upturn in total deal value. It predicts compound annual growth rate (CAGR) of 3.9% in 2016 in announced deal numbers while announced deal value across the metals sector is forecast to grow by 8.7%.

The rally in aluminium prices, after spot prices plunged to a six year low of US$ 1,433 / tonne in late November 2015, was triggered on the news that China Nonferrous Metals Industry Association (CNIA) requested the National Development and Reform Commission (NDRC) to buy aluminium output surplus and consider a probe into short-selling in domestic metal contracts to shore up prices. Although this was not officially confirmed by Chinese authorities, China’s State Reserve Bureau (SRB) has intended to buy 2 million tonnes of aluminium from 14 Chinese smelters and hold the metal for at least three years.

Metal Bulletin reported that the Chinese non-ferrous industry will receive about US$ 4.5 billion of loans from the China Development Bank to stockpile aluminium and other metals. The accumulated aluminium stockpile alone could reach 1 million tonnes in the first round, set for February. The development follows a meeting in January when executives from 6 major metals producers met to discuss ways in which to support the industry.

Also supportive for the aluminium price was news that aluminium exports from China, declared as semi-products, declined in January despite weaker Yuan against US Dollar (over 6 % since August).This could too lead to a conclusion that global demand has weakened. However, the lower exports are more related to the low LME prices and consequently lower prices of exported semi-products, as also to the lower primary aluminium production in China in December, due to smelter curtailments in the last quarter of 2015.

“As global prices of commodities have generally hit the bottom, China is focusing on stockpiling and reducing its own production, rather than shipping them abroad,” said analyst Will Yun at Hyundai Futures. “China’s efforts to restructure its steel and aluminium sectors seem to be making some progress.” 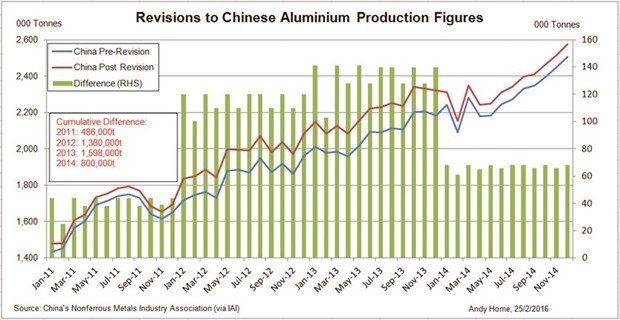 It is worth pointing out there are no statistical data for secondary aluminium, a significant component of overall supply – it is a statistical ‘’black hole’’.

Norsk Hydro has taken down the expectation for global demand in 2016, from 4% to 5% to 3% to 4%, expecting that the market will be largely balanced in the end of 2016. The fourth quarter last year was somewhat of weaker demand from the previous but still 4% growth in total demand compared to 2014. And also in the fourth quarter of 2015 compared to the fourth quarter of 2014, Hydro experienced 4% growth in demand, with regional differences, with China leading growth in demand by 6%. Demand growth was 2% in North America, while excluding Mexico it was 3%. Demand growth in Europe was 3%. The weakest markets were in South America, with 16% negative growth. In the supply/demand balance, Hydro sees over-supply in China of 2.1 million tonnes and under-supply outside China of about 0.9 million tonnes, resulting in about 1.2 million tonnes over-supply, which means that there has been a build-up of the global inventories during 2015.

Novelis’ shipments of rolled aluminium products climbed 3% to 779 000 tonnes in the last quarter 2015 over the same quarter a year ago, but revenues fell 17% to US$ 2.4 billion, largely as a result of ‘significantly lower average aluminium prices and local market premiums’.

In the case that aluminium exports from China continue to flow at last year’s levels or higher it will inevitably result in capacity closures both outside of China and in China (due to low prices) and implementation of import taxes for China’s aluminium in the rest of the world, before all major aluminium producers. In USA, India, the European Union and other regions, discussions between aluminium industry representatives and governments on this issue are under way. It seems that a coordinated action by governments is inevitable to protect ex-China primary aluminium industry from more closures and to prevent further oversupply at the market. Only then the price would grow to levels seen in previous years.